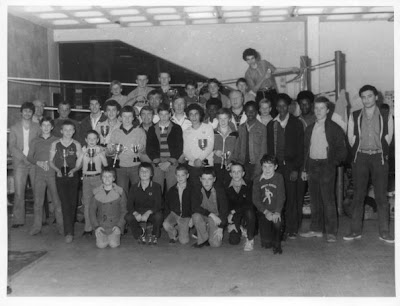 Islington Boxing Club was founded as the Kings Cross Amateur Boxing Club in January 1974 and was based in the community hall of York Way Court (which is now home to the Times ABC), close to Kings Cross Station.

These were backed up by a willing group of trainers and helpers who were all intent on getting the club established, hoping to rid the area of increasing vandalism by bored local youngsters in a deprived environment. The team consisted of: Wally White, Brian Wigger, George Barrow, Joe Annerson, Ron Hagland, John Roberts, Terry Emberson. Sadly, within 6 months, Reg Topper died of a heart attack and Bill McCourt moved on due to promotion in his police career so Ron Hagland took the roles of honorary secretary and fund-raiser. 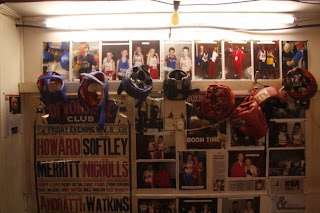 Within 2 years the club’s expansion required larger premises and in 1976 they moved to the Michael Sobell Sports Centre to accomodate the increasing membership of people from all over the borough. The club was now operating 6 days a week.

It was then considered appropriate to re-name the club and it then became known as Islington Boys’ Club. As the expansion of the club grew, the search was on for their own premises which would, in turn, attract some borough funding.

In 1981, the very supportive Mayor of Islington suggested the possibility of using the site offices of the Bovis Construction Company on the Elthorne Park site in Hazellville road N19. After a meeting with the Bovis Director it was agreed that, as the building of the Elthorne Park Estate was complete, Bovis no longer required the use of the site offices and were prepared to agree the sale of the building to Islington Boys’ Club, subject to Council Planning Permission.

The next challenge was to seek Town Hall permission for the building’s ‘change of use’ and after many meetings and extensive negotiations, permission was granted.

During this transition period there were some more sad losses as Wally White passed on and some of the club’s helpers were unable to follow the relocation to the northern end of the borough. Administrative help had always been in short supply and in April 1983 the club suffered another sad loss with the passing of dedicated member Jim Parodi which left Ron Hagland to pick up the role of club treasurer. Ron continues to carry the club forward with the aid of many friends and associates who hold him in great esteem to this day.

Frankie Vaughan, then vice-president of the National Association of Boys’ Clubs (N.A.B.C.), formally opened the club’s new home on the 17th February 1984 and there was much appreciated financial help from : the Joseph Levy Charitable Foundation, the Variety Club of Great Britain, Bovis Construction Ltd, the ILEA, Federation of London Youth Clubs plus many kind, personal friends who had supported the club along the way.

The club was converted and decorated internally in the club’s (Arsenal) colours of red and white and furnished with a comprehensive array of equipment to make it a truly traditional boxing gym.

The first 8 years were totally self-financed but, since then, Islington Council has assisted with a small annual grant. The majority of our funding still comes from our own efforts and the appreciation of our many friends and supporters. We now have a coaching staff of 5 full ABA coaches and an assistant ABA coach who keep all the boxers on the straight and narrow!! Oner Avara an islington old boy has managed the club since 2000 with an unparalleled efficiency. 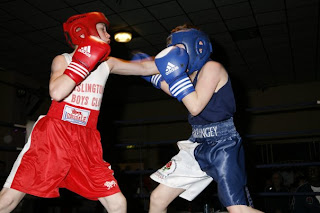 The club is in use 7 days a week (5 nights during the week and Saturday/Sunday lunchtimes ) with additional run sessions on Hampstead Heath at the weekends. We cater for serious boxers who want to compete ( mon/wed/fri ~ 6pm – 8.30pm ) as well as keep fit enthusiasts who can enjoy the same rigorous workouts without the full contact combat ( mon – fri ~ 7.30 – 9pm & Saturday/Sunday lunchtimes )

The club has produced some excellent talent over the years, including:
John Beckles – 1985 & 1987 ABA National Champion at light-heavyweight (1987 with Fairbairn)

In the past two seasons we have had national novice ABA finalists, London champions, a national golden gloves champion and a number of entries into both the novice and senior ABAs.

Courtesy of Reggie Hagland on behalf of Islington boxing club 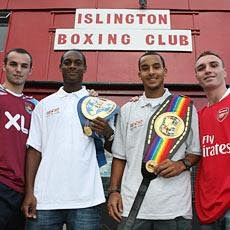 Have you got a story about your club that you would like to add to the British Boxing website?

On Thursday 15.4.10, IBC light-heavyweight, 22yr old AARRON MORGAN (79kg) was in action on the Angel/Finchley ABC show at the Boston Dome, Tufnell Park. AARRON’S opponent on this occasion was RYAN McDONAGH-ALLEN of Finchley ABC.
As the bell signalled the start of round 1, both boxers engaged immediately with a fast start and MORGAN backed up McDONAGH-ALLEN with some good double jabs to keep the Finchley boxer on the back foot.
A hard jab followed by terrific right hand from AARRON sent RYAN to the canvas and the ref administered a standing count on the visibly shaken McDONAGH-ALLEN.
As the action resumed, it wasn’t long before another heated exchange culminated with the referee having to step in to give RYAN a second standing count after which he rightly called a halt to the proceedings to save the Finchley boxer from further punishment. It was an impressive display from MORGAN who certainly stamped his authority on this contest.
On Friday 16.4.10, IBC Junior prospect, 13yr old PATRICK WARD (40kg) saw action on the Romford ABC show at Dukes Hall, Hornchurch in Essex.
PATRICK took on the host clubs LEWIS HUGHES (41kg) in a frustrating bout which saw the Romford boxer continually holding WARD in an effort to nullify the skilful work which is now his trademark.
Each round followed a similar pattern with PATRICK punching cleanly on target whilst moving deftly around the ring only to be grabbed by HUGHES and held until the referee separated the two. There was a clear difference in class and fortunately the judges could see this as they awarded the Islington boxer with a unanimous decision.
WARD drew praise from WBO Inter-continental lightweight champion KEVIN MITCHELL afterwards as the young Islington prospect received his trophy.
On Saturday 17.4.10, two more IBC boxers were in action on the Bodyshots ABC show at the Marriott Hotel in Bexley Heath, Kent.
15yr old CHARLIE DICKIE (76kg) was up against BERIM AITMETI (75kg) of the host club in a tough battle over 3 x 2min rounds. The Kent youngster was making his debut on the night and was greeted with the loudest applause of the evening as he entered the ring in confident mood.
Round 1 saw BERIM take the initiative as he backed CHARLIE to the ropes to keep him under sustained pressure, but DICKIE proved he could give as good as he got and a terrific battle ensued. In round 2 the tide began to turn as CHARLIE had weathered the storm and BERIM was visibly tiring.
It was now CHARLIE’S turn to take the initiative as he kept the Kent boxer backed up to the ropes with persistant pressure which made it very uncomfortable for AITMETI. In the last round, BERIM made a brief, last-ditch effort to gain some ground but CHARLIE was in no mood to let it slip as he stayed in control to claim the points victory.
Next, it was the turn of light-heavyweight debutant, 30yr old BAHADOUR MOUSSA who took on the host club’s FOLARIN FAMIEREWA in another absorbing contest which really tested both mens strength and endurance.
Both boxers were making their debuts and they belied their novice status by turning in a good, honest and clean contest with very little intervention by the referee. It was a fairly even match until the latter stages of the 3rd round when BAHADOUR opened up with some terrific combination punching to force a standing count on FOLARIN. Shortly afterwards, MOUSSA had his opponent in trouble again and the referee rightly stopped the contest to give another victory to Islington’s boxer.
Islington Midweek League – Premier Division.
Islington Admiral United ‘A’ – 4
London Tigers – 3
In a match that Admiral ‘A’ needed to win to maintain their league title challenge, it took a last minute headed goal from veteran defender Ken Regis to secure a vital three points. London Tigers proved to be difficult opponents and this was a well earned victory.
Sam Elishi gave his side a good start with a goal after 5 minutes but Tigers wiped out this lead and then took a one goal advantage 10 minutes later. The league leaders responded and a goal from Jason Medford on the half hour levelled the match at 2-2 for the interval.
Admiral went 3-2 in front after 55 minutes when Charalambos Hatsmeletiou’s shot found its way through a crowded penalty area to beat the keeper. Tigers responded again and drew level, then missed a clear chance to take the lead. With time running out Hatsmeletiou’s corner was powered home by Ken Regis to win the match.
Islington Admiral Utd ‘A’:- Gardner, Hatsmeletiou, Edwards (Regis), Moynihan, Burton (S), Leach, Elishi, Husbands, Burton (D), Medford, Altinok (Barker).
Camden & Islington Youth League.
Islington Admiral Youth U12 – 2
Chapel Boys U12 – 1
Admiral U12’s finished their season in style by beating champions, Chapel Boys. A great result for Bill Brockwell’s hard working side after a good season. Yilmaz Mustafa grabbed both goals for Admiral to make sure they ended on a high!
Islington Admiral Youth U12:- O’Hara, Apple, Bailey, Smith, McKee, Hayes, Addo, Mustafa, Cain, Naleye, Dundon.