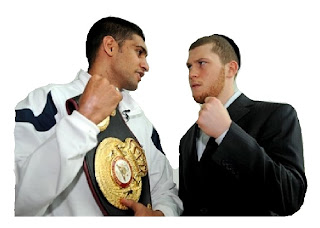 Amir Khan‘s first defense of his world title against Dmitriy Salita on December 5. looks on paper as being an evenly matched fight, dependant on the progress Khan as made since his change from challenger to champion. Khan told the press that he will up the gears as his career enters its next phase. Fighters automatically become better fighters when they become champion, with the confidence of the achievement. The first defense of his WBA light-welterweight belt will be against undefeated Ukrainian Salita at Newcastle’s Metro Arena after winning the belt in July.
It’s almost hard to believe that Khan is not only world champion now, but he would be defending a world title belt, because this time last year he was knocked out by Cuban Breidis Prescott, the first defeat of his professional career.

The Bolton lad sacked Cuban coach Jorge Rubio after the defeat and replaced him with Freddie Roach, who also coaches the best pound for pound fighter in the world in Manny Pacquiao.

Since Khan appointed Roach he has recorded victories over and Oisin Fagan and Marco Antonio Barrera before capturing the WBA crown off Andreas Kotelnik in Manchester in the summer.

Salita became the mandatory challenger for Khan’s belt after beating Raul Munoz in May and the Englishman made an early return to training in a bid to ensure he is in the best possible shape for the fight.

“He’s a great fighter, he’s a great boxer,” Khan said. “I don’t know much about his amateur background but to be a number one mandatory, he must be good, and his record says it all.

“I know Dmitriy is going to come into this fight wanting to win this world title so it’s going to be tough. I’m going to go in there and give it 110%.

Salita, who was born in Odessa but moved to New York aged nine, has a record of 30 wins and one draw since turning professional at the age of 19.

Sixteen of his 30 wins have resulted in stoppages and the 27-year-old is widely seen as the underdog for the fight, which will be only his second outside the US.

Khan has spoken of his desire to become the undisputed light-welterweight champion but Salita is keen to stop him in his tracks.

He said: “Amir won’t be defending his title. I’m coming to take it. I have a lot of respect for Amir, he’s a great boxer and Freddie’s a great coach, but I’m focused on doing what I need to do.”

The press conference was conducted with pure professionalism and respect from the both fighters, there were no insults by either fighter, both were cordial to each other.

There was some talk of this being the first fight between a Muslim and a Jew, and it is, both come from two different religious backgrounds, Amir being a devout Muslim and Dmitry an Orthodox Jew. But they are both boxers and all boxers sing off the same hymn sheet in the ring.

When the question of religion was put to the fighters, they responded in the same professional manner.

“People should not make something that it’s not,” Salita said. “We are two guys from two different backgrounds coming to fight. I respect Amir Khan inside and outside the ring.”

Khan believes this fight is about the title on the line not a religious battle:

“We are professional sportsmen in a worldwide sport,” Khan said. “This fight is huge because we are fighting for the world title but not because of any religious aspect.” By Chris Maylett, British Boxers