David Haye is the New Heavyweight Champion of the World 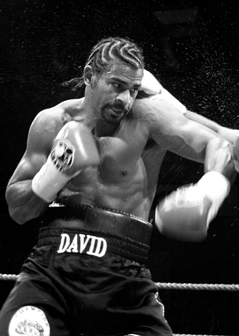 David Haye is the New Heavyweight Champion of the World, that’s got some ring to it, and what a sweet Saturday night in Germany for Haye and his team and for British Boxing – we have another champion of the big men, the first since Lennox Lewis retired in 2003.

Haye put on a classy and sometimes cautious display to claim the WBA heavyweight crown from Russian Nikolay Valuev in Nuremberg.

Haye, 29, won by majority decision, winning the fight on two judges’ scorecards, with the other judge scoring it even. the first judge could not split them at 114-114 the final two gave it to Haye 116-112. When the words “from London, England” were announced there was an explosion of joy in Haye’s corner to greet one of the most monumental efforts by a British boxer.

Haye, giving away seven stone to the 7ft Valuev, fought the perfect fight, staying on the move and making the lumbering Valuev look every one of his 36 years with his movement and speed.

Haye’s achievement is also remarkable in boxing and sporting terms in that he is only the second former cruiserweight champion to win a version of the heavyweight title, after former four-time heavyweight king and ring legend Evander Holyfield.

As well as going down as one of the greatest wins by a British fighter abroad, Haye’s victory gives boxings heavyweight division a kick up the backside, after many years of boardam, with no real star quality, Haye brings a ray of light and injects some much-needed sparks into a previously mundane heavyweight division.

Over 10,000 packed the Nuremberg Arena, including a large and noisy British contingent, to see David do what many thought was impossible and slay Goliath. I did predict a decision win for Haye at a nice price, so all good.

Haye afterwards said that he suspected he broke his hand as early as the second round!

“I damaged my right hand in the second or third round and I tried to rein it in, which is why I went with my left,” he said.

“The hand is very tender and very sore and that’s why I used it irregularly.

“His head is solid, the hardest thing I’ve ever hit. It’s like hitting a solid brick wall.

“I’m pretty sure it’s broken but it’s a small price to pay for being the heavyweight champion of the world.”

Haye almost ended the fight in the last round when he stunned the giant Valuev with a solid left hook and a crashing right hand onto his solid jaw. Until now Valuev as never looked hurt, let alone wobbled and Haye was nearly recreating Rocky 4, and a Hollywood finish to this dream come true of winning the richest prize in sport.

“This means everything to me. Since I was a little baby I wanted to be heavyweight champion of the world,” said Haye afterwards.

The Haymaker becomes Britons forth fighter to win a world heavyweight title, Bob Fitzsimmons, Frank Bruno and lennox Lewis were the others, Haye is now in good company, and is now Britain’s flag bearer in the boxing world, Sports personality of the year is surely a forgone conclusion.

Haye now has 23 wins and 21 knockouts from 24 fights, and will inevitably go after a unification bout with one of the Klitschko brothers: WBO and IBF champion Wladimir, or older brother Vitali, holder of the WBC crown.

What ever comes next for Haye, he can savour this moment, then see what cards are on the table in the new year. Haye is now in the drivers seat of negotiations this time, unlike he complained about when trying to seal a fight with Vitali Klitschko, before the Valuev fight was made. With David’s charisma, good looks and fighting balls, he is in a position to write his own cheques in the coming years and he wont be short of offers.

Davis Haye stands at the top, where many great legends of the ring have been, being heavyweight champion brings more to a boxer than a belt, Haye can become a world wide star an household name and will be a role model to many young people, and he owns the future of the heavyweight legacy and where it goes from here. By Chris Maylett

The Fight in Pictures, click here to view them