Schools Benefit from the introduction of Boxing 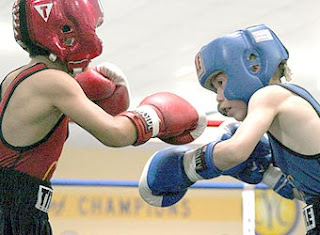 He touches on the introduction of Boxing back into schools in England, and the positive effect it has had on attendance records and behaviour amongst the youth.

Rise in boxing credited with improving behaviour and school attendance

Just over a decade ago it was a sport many thought should be banned.

But after a mini renaissance in the past ten years, boxing is now on the rise and is being credited with improving behaviour and attendance within schools.

The number of people registered with amateur clubs in England has nearly tripled since 2005 and that figure looks set to grow after David Haye won the world heavyweight title ten days ago.

In the past four years alone the number of schools with boxing on the curriculum has soared from 20 to 1,931 and according to the latest national school sports survey boxing is now available in 34 per cent of secondary schools in England.

‘Twelve years ago I considered boxing almost too dangerous to be considered as a mainstream sport,’ said Tessa Jowell, the Olympics Minister.. read more at the Mail Online