Kevin Mitchell steps up to the plate against Prescott 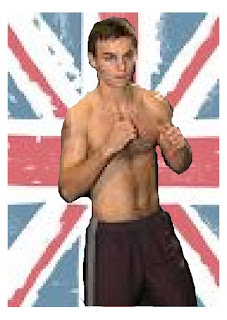 On the undercard of the Amir Khan fight tonight there is a intriging fight featuring Khan’s former one-round conqueror Breidis Prescott and British fighter Kevin Mitchell.

Mitchell, 25, has had a frustrating time this year, with his career almost on hold, with long periods of inactivity and he needs this big fight to put him back into the nation’s consciousness, and there could hardly be a better or indeed more challenging oppoinent to face than the big punching Prescott who almost became a household name in Britain when knocking out now World champion Khan.

After a breakthrough year in 2008 in which Mitchell took the British title from Carl Johanneson in front of 20,000 people on the undercard of David Haye‘s world cruiserweight title fight with Enzo Maccarinelli, big fights were expected follow.

But after a decent performance in defending his WBO Intercontinental belt in America against Walter Estrada soon after, Mitchell made the tough decision to have hand surgery.

For Prescott, the fight also represents a crossroads. Having beaten Khan and won by disqualification over Humberto Toledo, Prescott blew his big chance of a Khan rematch by losing a split decision to Miguel Vazquez last time out.

He said: “Kevin is a good fighter but with all due respect to him Amir is better.

“It’s a tough fight for me but I’m a lot better prepared for this fight than for when I fought Amir.

“Beating Amir was a very important night for me, the best night of my career. It really put my name on the map.

“Amir came to the fight undefeated and after beating him I got worldwide recognition.

“I want a repeat of what happened that night and have been training hard to achieve that.

“I was surprised I beat Amir so early but I have punching power so anything can happen.”

Prescott has a record of 18 knockouts in 21 wins, but lost his last outing on a split decision against Vazquez.

He added, “I feel like I have a lot to prove. I beat Amir but you’re only as good as your last fight.

“It’s about proving something to myself. I’d consider giving Khan a rematch.”

A victory over Mitchell would almost certainly pave the way for that fight to happen, and such would be the hype surrounding it that it could even prove to be the occasion of Khan’s proposed Las Vegas debut.

For Mitchell, however, the rewards promise to be equally huge, with a victory over the man who destroyed Khan suddenly lifting the Dagenham man from Bethnal Green bill-topper to the verge of a WBA title shot.

“Of course I want to fight Amir Khan. It’s a huge fight in Britain and it’s a major fight I would say yes to at the drop of a hat,” said Mitchell.

The danger that awaites him in Prescott doesnt faze Mitchell and he is well aware of the threat he poses.

“When Amir Khan fought him he was a young boy, very inexperienced and he walked onto one.

“But Prescott jumps in with his chin up in the air like a typical Colombian. He’s very gung-ho and if you look at the video clips of his fight with Amir, his chin is wide open to the world.

“If you put together any sort of combination on this kid then you will break him to pieces. I’m going to take this kid apart.”

If Mitchell gets past Prescott he will get a shot at the WBO championship and then says he hopes to take on Khan, who still thinks he can drop to lightweight.

Mitchell is well aware that a victory for him here tonight could catapult him into the British Boxing spotlight and is determined to take his chance.

“As a 10-year-old boy I grew up watching superstars like Nigel Benn, Chris Eubank and ‘Prince’ Naseem Hamed I used to dream of being involved in big fights like they had,” said Mitchell.

“I’m a 25-year-old man now and I’ve worked hard all my life to get my shot and if you think I’m going to let it go now, you’ve got another think coming. It means the world to me to get this chance.

“After this I’ll fight the WBO champion, whoever that may be at the time, and then I want Amir Khan at Upton Park in the summer. He says he can still make the fight, so why not?”

“When Amir came on the scene it put me in the shade a bit,” said Mitchell.

“But when I beat this kid on Saturday it will show I have got what it takes and I am a better fighter.”

The 25-year-old from Dagenham told BBC Sport: “I was my own man before Amir Khan turned professional and I was the one getting the headlines and who was in the limelight.

“I’ll hopefully get the respect I deserve after this fight. Beating this kid will make me a household name across England and make me a British superstar.”

This is an hard fight to call, and could depend on how Mitchell feels at the weight, and if he can absorb Prescotts big shots and find the range to land his own, and push the Colombian back.

If Mitchell’s recent inactivitey is to play apart, this could be a very tough night for the British Boxer, but trying to not let my heart rule my head, I pick Mitchell to pip Prescott on points in a tough bloody battle, in what could be a candidate for fight of the year over here, and could be the making or the breaking of the Dagenham man. By Chris Maylett