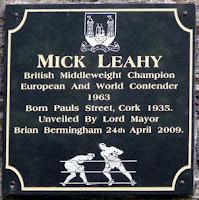 It is with great sadness that we report the passing of a true Irish boxing legend Mick Leahy the former British Middleweight Champion and European and Commonwealth title challenger.
Mick who had been suffering from alzeimers and lived in a care home died last night in Walsgrave hospital Coventry.
The first Irish man to win a British title he is proberbly best known for his win over the best pound 4 pound fighter of all time Sugar Ray Robinson.
Mick was born in Cork, Ireland and was a successful amateur, he was the amateur Irish Lightweight Champion, also ABA Semi-Finalist in 1956 with a  Amateur record of 145 wins, and only 15 losses, as a professional Mick won 46 (KO 16) lost 19 (KO 5) with 7draws.
Mick’s fight with Sugar Ray Robinson 1964, Ice Rink, Paisley, Scotland, United Kingdom
By.Jason Lowe Mick’s friend
Mick passed away in hospital on Tuesday 5th of January after a long illness.
The Cork born tough red haired fighter had long been suffering from alzheimer’s disease was taken to the Walsgrave Hospital in Coventry at the start of December when his family saw a decline in his health. Leahy had to under-go a operation which after a few days was allowed to be released.
However the Irish champion contracted a chest infection, which led to a lung infection and it wasnt long before pneumonia set in on the frail former champion. Leahy a battler all his life fought all he could to win another round, but sadley with this fight, the referee of life counted him out. Micks faithful wife Teresa had kept a 24 hour bed-sit with her husband for over the last week of his life.
I had been a friend of the familys for since interviewing Mick some years back. I had been greatfull to do this before Micks life was taken from his grasp. I visited Mick with the former British & Commonwealth Heavyweight champion Danny McAlinden late last year and we both left in shock and disbelief.
Mick was a doteing Father to all his children and shared fond memories with me about when he fought guys like Boswell st Louis, Wally Swift, George Aldridge and also when he took the legendry Sugar Ray Robinson the full distance to beat him.
He said Boswell was the hardest person he had fought and he was best friends with Randolph Turpin. Mick paved a golden road for Irish boxing when he became the first Irish man to win a British title on there English soil.
A chilling car crash put a stop to his boxing life but even after this he still refused to throw in the towel and done everything he could to support his much loved family. Mick was a loving Father who dotted on them 100%.
In September 1965, on the way to see his manager after hearing a fight in New York had been cancelled, he ploughed into the back of lorry, parked with no lights on Kenilworth Road.
Teresa, who was pregnant with their youngest child, had wanted to go with him. It was fortunate she didn’t. The passenger side was completely crushed.
Doctors said only Mick’s physical fitness kept him alive, any ordinary man would have perished in the smash.
It was a time before seat-belts and he had been catapulted through the wind-screen, shards of glass piercing his head and severing nerves.
He lost the sight of his left eye and his hearing was damaged. Doctors warned the injury to his head would probably mean a deterioration in mental agility as he aged.
For four years he didn’t work but then anxious to be occupied he returned to the construction trade which had been his living before turning professional. Read more
“Mick was the Milestone for Irish boxing. He was a great friend and such the perfect gent,” said Jason Lowe a friend of Mick’s.
“He was a fighter by trade but a family man by heart. An idol when I was growing up and I loved the time I got to chat with him and his family over tea about boxing. His wife was at his side when he left us.”
“Mick was a true champion and my life was made so more possitve meeting him.
Mick I shead a tear for you today as your such a loss. R.I.P. champ. He was in so much pain but remained a true fighter to the end!”
Former Boxing champion Danny McAlinden, Bobby Arthur, Jack Bodell and Wally Swift exspressed there regards to the Leahy family.
Boxing reporter Jason Lowe, Harp Irish newspaper & Spaghetti Gazetti on-line.
Boxing as lost its first brother of 2010 and our thoughts and prayers go out to Teresa and the family. By: Chris Maylett www.britishboxers.co.uk
Mick Leahy Boxing Record