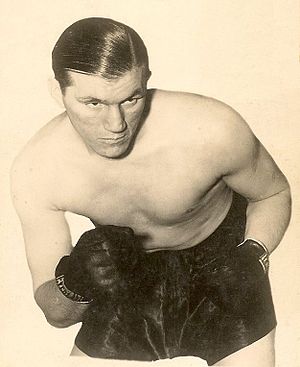 Louis himself saw the fight as nothing more than a warm up for stronger opponents who would undoubtedly be lining up to challenge him. No-one outside of gave Tommy the slightest chance of winning.

was looking forward to a convincing and early finish to the fight. Tommy Farr had not read the script.
Joe Louis, one of the greatest heavyweights of all time, had knocked out 8 of his previous 9 opponents and proceeded to knock out his next 7, but was fearlessly attacked and hurt by Farr, Louis was hurt and made to work like never before by the fearsome Welsh Dragon.
Farr gained the respect of Louis despite losing a controversial points decision over 15 rounds.
Back in it is said that almost every house in the land was listening to the fight on the radio that night.
Excitement was at fever pitch at the ringside when the final round begun, the crowd shouting “Stay with him, Tommy!” Women in the ringside seats became almost hysterical.

Joe Louis v Tommy Farr for the Heavyweight Championship of the World 1937
Here is some commentary from the fight; “The Welshman continued to keep his left going well, and he landed with a series of four in succession to Louis’s face. Farr attacked with two left-handers and then chopped over a right, forcing Louis to the ropes once again.
“He attempted to put over a smashing right, but he mistimed it and caught Louis on the shoulder. He pecked Louis lightly in the face and then jabbed him with a hard right to the same quarter.

“Farr maintained a furious attack and got in to the head and body with both hands. Farr ended the round with a fusillade of lefts to the face.

Farr astonished not only the American writers, but those few friends of his who had come to see him engage in the battle of a life. For 12 of 15 rounds he fought with two cut eyes.

Farr showed humility after the fight saying, “I’m very sorry I lost, but I can assure you I tried my best, but the officials didn’t think my best was good enough.”
When asked if Louis had hurt him? Tommy said, “I was hurt plenty as my eyes

will show you, and my hand give out on me in the 5th round, but I don’t want to

The Welshman’s team were sure that if Tommy’s eyes had held out the fight might have been a different story, Farr’s manager Tom Broderick said; “I really think that if Joe Louis had been handicapped with two bad eyes like

Tommy, that there would be a new heavyweight champion of the world today.”

Louis was full of respect for Farr after the fight, although he said Tommy had caught him with some ‘corkers’ he had not hurt him, although Farr’s punches must have had some effect on Louis, when he referred to the Welsh Farr as being England’s champion!

“Tommy is a good puncher, better than I figured, he didn’t hurt me badly at any time, but he caught me with some corkers.

”His hardest punch was a left hook in the sixth round, but it didn’t stun me.

‘s champion proved a full evening’s job, and my crown is doffed to him, I am glad that he gave me a tough scrap, but I am perfectly satisfied with my showing.”

When asked, if he would like to fight Louis again, the battle hardened Farr said;  “Of course I will, I will fight anybody, anywhere, any time.”
Tommy (Thomas George Paul) Farr was born in Clydach Vale, , in 1914. The son of an Irish immigrant, and one of eight children. His mother died when he was only eight years old, his father died when Tommy was eighteen, after a long illness.
Tommy Farr, like so many of his fellow countrymen, was born into poverty leading to the inevitable job of working down the coalmines, before his teens.

In those days of appalling conditions in the mines and poor pay no-one liked working there but Tommy particularly disliked it and soon quit, doing what ever work he could get and suffering ‘long nightmares of unemployment’

It was lifelong friend and ex-miner, Joby Churchill that turned Tommy Farr’s life around by suggesting that he go along to Joe Gess’ boxing booth at Tylorstown, Wales.

Boxing became his means of escape, a decision he was to later describe as ‘the lesser of two evils’. So he followed the route that Jimmy Wilde and Jim Driscoll had taken before him; he joined the boxing booths.

On December 1926 at the tender age of 12, already having left school, he engaged in his first official fight against Jack Jones at Tonypandy Glamorgan, , over six rounds, from then on he was nicknamed “The Tonypandy Terror”
He went on to win the Welsh Heavyweight Championship in 1936 and the British Heavyweight Championship against Ben Foord in May 1937. peaking in the challenge to Louis.

At eighteen, realising he would never make his fortune in South Wales he decided to head for London. As he himself described, he walked to London, arriving with only a few shillings in his pocket.

This did not work out for him either having only one fight, against Eddie Steel, which he lost. On his return to at last fortune smiled upon him, putting together seven straight wins he then took the Welsh Light-Heavyweight title with a points win against Randy Jones.

Another six wins (making it 14 straight) led to the first of 3 meetings with Eddie Phillips, all of which Tommy lost. The last of these 3 meetings was for the British Light Heavyweight title which was lost over 15 rounds. After this fight Tommy was to reach a turning point in his career.
During a run of 18 fights without defeat Tommy Farr beat ex-World Light Heavyweight Champion Tommy Loughran and Bob Olin, another former light heavyweight champion. Even with his growing reputation Tommy was not expected to defeat Ben Foord in a challenge for the British and Empire titles in March 1937.
The fight wasn’t a classic but Farr’s crouching style and consistent scoring with the left hand secured the titles. After a somewhat mixed beginning to his career Tommy was now British and Empire Heavyweight Champion and ready to mix it with the best the world had to offer.

The next opponent for Farr was Max Baer the great former World Heavyweight Champion, and a feared fighter of the day. Understandably, Tommy was the underdog; Max Baer was going to beat him and beat him easily – or so Max thought. Tommy turned the odds upside down with a great display of boxing, while for the most part Max Baer played to the crowd. Mistakenly, self styled playboy Max thought that he could finish Tommy Farr whenever he so chose.

When the time came that Max thought he would now put an end to the Welshman’s challenge he found himself in a real fight. By now Tommy had established a commanding points lead and was not about to give it up.
Max moved in for the kill; Tommy jabbed him – Max threw big right hands; Tommy jabbed him – Max tried to box; Tommy jabbed him. Tommy was fighting a great fight dancing, crouching, bobbing and weaving, jabbing and when Max did manage to get in some good punches Tommy continued to fight back.
Tommy cheered on by a large crowd at Harringay Arena, London, including many miners from his home town and the Welsh valleys, who had made the journey to The Capital to cheer on there hero,  who claimed a point’s verdict in his best win yet.

With another superlative performance Walter Neusel, who was dispatched in only 3 rounds leading up to the epic battle with the great Joe Louis, and a career best purse of £12,000.
Tommy Farr, often described as the ‘Gallant Welshman’ had a fierce appetite for fighting, but was often accused of not having a big punch to really make a mark on the World stage. But Farr went up against the best and always finished on his feet.

Tommy Farr stepped out of the boxing ring into the recording studio and cut four sides fWith his new found fame after the Louis fight, Farr was a popular figure and household name,  and was asked to make a record for Regal Zonophone in 1937, It was called ‘Remember Me’ and was introduced by TV star of the day George Formby.
Regal Zonophone – “Always the Most Novel and Unusual in Records”
Although Tommy Farr was a wealthy man when he retired in 1940, he was facing bankruptcy when he made a comeback ten years later, at 36 years of age.
He regained the Welsh Heavyweight title but finally ended his career, 3 days short of his 39th birthday, when Don Cockell beat him in 7 rounds in 1953.
After his defeat Tommy took the ring microphone and sang the Welsh national anthem – a fitting finale to his career. Welsh-born Farr had a total of 296 fights, from 1926 ~ 1953, sometimes fighting up to 5 times a month, and amazingly on the 2nd May 1933 fought 4 times in one night.
He lived in Hove for many years and when he retired finally from the ring, he took over the Royal Standard pub in Queen’s Road, Brighton . Farr took an active part in local affairs, being a prominent member of the Sussex Ex-Boxers Association.
Tommy Farr died on St. David’s Day 1986 at Shoreham in . His ashes were interred in the same grave as his parents, at Trealaw cemetery, under the marble monument he himself had erected for them, with the inscription, ‘ In Death reunited’. British boxing will never forget Tommy Farr, 1914 -1986.