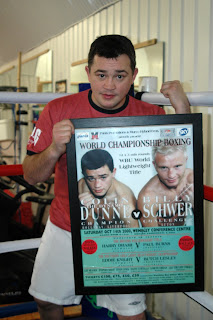 When Billy Schwer challenged Colin ‘Dynamo’ Dunne, for his WBU Lightweight World Title back in October 2000, the thousands of fans that packed Wembley Conference Centre were treated to one of the greatest British, if not world, fights of all time.

Right from the opening bell the Lightweight division’s two best fighters, of the time, stood toe to toe exchanging  power punch after power punch. Schwer was the first to land a truly hurtful shot in the first round, a solid right to the jaw which clearly rocked Dunne. But Dunne came straight back at Schwer landing a couple of crackers and consequently won the round.

In the middle rounds it seemed that Schwer had managed to secure most due to landing more quality shots. But by the seventh he was starting to show signs of fading and ‘Dynamo’ started to control the proceedings.

The titanic battle went the full twelve rounds and ended with a close split decision win for Colin Dunne.  The British Judge scored the fight 116-114 for Billy Schwer whilst the American and South African judges see it 116-112 and 115-113 for Colin Dunne.

Dunne Vs. Schwer quite rightly won the ‘Fight of the Year’ honours at the year end awards and much of the media lavished further praise on the two stars by stating that they and the fans deserve Colin Dunne vs. Billy Schwer II

Nearly ten years after this spectacular fight Colin Dunne and Billy Schwer are finally set to again face each other in a boxing arena. This time though it will not be Dunne and Schwer that are gloved up, these two Lightweight greats will instead be in the corner with their respective charges, Ian Harrington and Kyran Speirs, as they do battle at the Dead Man Running movie sponsored Judgement Day III at T47 in Southwark, South East London.

The ever cheerful Colin ‘Dynamo’ Dunne, who still regularly trains at Rooney’s Boxing Gym in Southwark, took a little time out to talk about facing Billy Schwer, albeit as cornermen, again. “It’ll be interesting. The last time me and Billy were in opposite corners we were going hammer and tongs at it. Since them days we have met on the boxing circuit a few times. Billy’s a great guy and I’m not too bad meself (laughs).

This’ll be fun, I’ve known Billy quite a few years and we’re quite good mates. I haven’t done a lot of corner work as such and I don’t think Billy has either, so I think we are both on an even par for this one as we’re both inexperienced corners.”

Judgement Day III, which will take place at the new T47 venue, has attracted some of the UK’s top White Collar fighters including Middleweight sensation ADAM MCCANN, who will be headlining the show, and Welterweight star ED STOREY, who will be co-feature. In addition to the eight bout Boxing card, which includes the return of female star MARIANIMAL who will defend her Featherweight crown, there will also be two Mixed Martial Arts bouts organised by BANDOGS MMA.