Lenny Daws is still the British light-welterweight champion, after a hard fought draw with Jason Cook 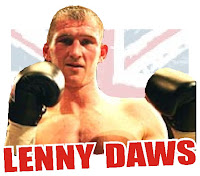 Lenny Daws held onto his British light-welterweight crown tonight after fighting to a draw with Jason Cook at York Hall.
Daws who looked to be hurt in the first round after Cook landed a cracking left hook, as Daws had dropped his right hand slightly.
Cook started the fight brightly and at a good pace and by the midway point was leading the fight.
The second half of the fight saw Daws start to pick up the pace, especially in the last three rounds, where at times he rocked Cook, and looked like only a good combination away from a forced stoppage, but the brave Welshman fought to the end and although I thought Daws had just nicked it, on reflection Cook deserved his bit of good fortune.
A humble brave Cook, proved he still had the desire and heart, boxing well to push Daws all the way over the twelve rounds.
Speaking to Sky Sports Daws who believed he deserved to win and had just knicked it.
“I thought i’d done enough and nicked it by a few rounds” said Daws.
Asked if he was hurt during the fight especially by that left hook in the first round, Daws said; “I wasnt hurt, i could feel the shots but they didn’t really hurt me”
Cook admitted that he thought Daws had got the decision, claiming that the challenger must rip the title away from the champion, but will take this, and hope to get a rematch with Daws in the next couple of month’s, and why not Cook deserve another shot.

Also – On the undercard; Liverpools Steve Williams won a ten round split decision against London’s Michael Grant to claim the English light-welterweight title in a good close scrap that swayed backwards and forwards. By the end there was nothing in it.

A fight with British champion Lenny Daws will now be in William’s sights, although again a rematch between these two wouldn’t go a miss.