In the Ring with: Derry Mathews, Liverpools former WBU Champion will fight on.

British Boxers caught up with Derry Mathews this week, to ask him about his career and plans for the future.

Derry told British Boxers that despite his recent setbacks losing his WBU featherweight title and his last three fights, we have not seen the last of Liverpool’s Golden Boy.

It is a common belief in the game, that the talented Mathews did not fulfill his obvious potential, and the mapped out road to success that was being touted for him that went off course.
Derry revealed that he is back in training and will be stepping back in the ring,possibly moving up in weight to the lightweight division, after fighting most of his career as a featherweight.

“I feel coming back after my break is the right time and I’ll be competing at lightweight and I don’t think there is anyone in Britain, when i am on my day that will beat me, now that I have got a clear mind, all that its about now, is getting my body in shape with my conditioning coach Dr James Morton.” said Derry.
Derry’s most memorable night came when he defeated tough Salford man Stephen Foster, to win the WBU Featherweight title. The win over Foster announced Mathews as a force on the domestic scene, and he made two successful defences against John Simpson and Matthew Marsh before losing the belt to Mongolian Choi Tseveenpurev in Bolton on April 5, 2008. Derry had an awful night against Choi, visiting the canvas three times, before a body shot ended the fight at the end of fifth round
After the defeat to Tseveenpurev, three month’s later, Derry came back to beat the Kenyan, John Gircharu over eight rounds, fighting in front of his loyal Liverpool fans, Derry put on a fine performance to prove that the defeat had not destroyed his confidence.

In August 2008, Mathews decided to split from Frank Warren, and signed a deal to join the growing stable of fighters, over at the newly formed Hayemaker Promotions.

On speaking about the deal Mathews said; “The deal is unbelievable and Hayemaker Promotions are going to bring big things for me”
He was knocked out in the 9th round of his first fight with the fledgling promotional outfit. The fight against Derry’s first fight for Haymaker was to be a British Featherweight Title Eliminator against the unbeaten Martin Lindsay and was  the under card to Ryan Rhodes defence of his British light-middleweight title.
Derry started the fight brightly putting Lindsay down in the 2nd round. Boxing great and ahead on points, when in the 9th round he threw a lazy jab, dropped his right hand and Lindsey capitalised with a peach of a left hook and ended Derry’s dream of a British title shot.

His second fight with Hayemaker in March 2009 took place back home in Liverpool, and unfortunately ended in disappointment as he suffered a stoppage defeat to Harry Ramogoadi. It was evident that the defeat to Lindsay had had a bigger effect on Derry than he had anticipated.
After an 8 month layoff, Derry was offered a fight against Scott Lawton in a catch weight contest, which was on a Ricky Hatton promoted show, the night Matthew Hatton challenged Lovemore N’dou.
Again it was to be another setback for Derry, when after boxing well in the first half of the fight , walked into a sickening uppercut from Lawton that shook him, forcing him to back up into the corner, another hard right hand from Lawton saw referee Robert Chalmers jump in to stop the fight, initially I thought the fight was stopped prematurely, but Derry had no complaints, and took the defeat gracefully in congratulating a very happy Scott Lawton.
Now after 5 month’s out of the ring, Derry as started some light training and hopes to be back in the ring in July.
“Well am going away on lads holiday in May, I am in light training now so maybe some time in July, I feel I’ll be a lot bigger and stronger at lightweight all though its not a definite I’ll be doing that weight, I might just surprise people and do super feather again.” he said.
“I left Haymaker before my last fight on good terms, I am still under contract with Hatton promotions, and I am planning on just getting a few fights in by December and then maybe a shot at title.
“I am enjoying the training though, I haven’t hit a bag or sparred for few months, I’m just enjoying running and weights at the moment. he added.
Profile on Derry Mathews
We asked Derry what he thought of David Haye and his recent heavyweight achievements.
“David Haye is the best around, a top fella and a top champ and long may it continue for him. 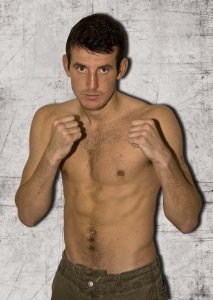 When and how did you get into boxing?

I Got into boxing by living next door to the famous Solly (Salisbury ABC Liverpool ) and haven looked back.
What was your first gym and trainer?
The Solly trainer was Tony Challinor won 6 national titles with him including senior ABA title and junior Olympic gold.
Amateur record? Pro Record?
Amateur 65 fights, lost 12 – 15 contests for England , Professional 27 fights, lost 4
Toughest opponent you faced?
In sparing it has to be David Burke the man was on a different level to people and in a contest it has to be Choi.
Toughest Part of being a boxer?
I love all about being a boxer, but is hard when u can’t go to family parties and friends parties because your in full training.
Who do you wish you had fought or want to fight?
Steve Foster again so I could prove to people it wasn’t a fluke when I gave him a boxing lesson
Best fight you have seen?
I have seen a few, I usualy say Barrera vs Morales, but I watched Jamie Moore vs Matthew Macklin the other day so I am going with that one.
Dream Fight? who v who?
Floyd Mayweather vs Manny Pacquiao
Childhood Hero?
Naseem Hamed, Mike Tyson
Favorite all time boxer, World and British?
Naseem Hamed
Derry’s favorite boxer Naseem Hamed compilation video
Favorite current fighter World and British?
Amir Khan, I cannot see anyone beating him.

What do you do when you are not Boxing?

I have set up my own boxing and fitness academy in Liverpool, we have 7 people at the moment doing a gun knife and crime project, getting kids of the street and finding them the right path in life, collage, university Etc.
Which British Boxers should we look out for?
Steven “Swifty” Smith and Paul “The Smiling Assassin” Edwards, I also like the look of Frankie Gavin and James DeGale. 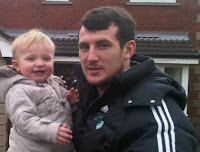 My kids, my family and fans, never let them down goes through my mind before a fight.
What would you change in Boxing?
Some of the bad decision’s lately.
What music do you listen too?
Any music doesn’t bother me.
Last book you read?
Joe Calzaghe Autobiography
Favorite films?
Funny ones.
Who would play you in a movie of your life?
Myself, haha
Favorite Meal?
Pasta, Lasagna.
Best Holiday destination
Been all over the world but I’ll say Thailand.
What other sports do you watch?
I play a lot of snooker but I love all sports. 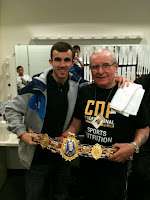 Best friend in Boxing?
Paul “Smiling Assassin” Edwards, (pictured right with British title) top Friend out of boxing as we grew up living in the same street, also been amateur and pro in the same gym together, the kid will go far in life, also George Vaughan and Danny have played a father figure role and brother to me.
Which 3 people would you be stranded on a desert island with?
3 playboy bunnies ha ha!
Tell us something we don’t know about you?
I have 2 beautiful boys aged 5 and 1.
What does your future hold?
I retired from the ring in November, but looking on coming back in the next few months, I have, missed the game so much I have got the fire back in my body and head. I Feel boxing as missed me and my traveling supporters, who are a major part of my achievements. I believe I will be back bigger, better and stronger than ever. It time for a new chapter! Dirty Derry is back.
British Boxers would like to thank Derry Mathews for this interview.By Chris Maylett