British BoxersMay 16, 2010
LATEST BOXING NEWS0 Comments7 min read
Derek Chisora lifted the British heavyweight title at Upton Park and confirmed what Danny Williams has been saying for months – he’s a shot fighter.
Chisora took just two rounds to end Williams’ career, dropping him twice in the second to confirm his superiority.
It was a far cry from some of the glory nights of Williams 15-year presence in British boxing, even if the stage – a packed-out Upton Park – was a fitting one.
Chisora, taking the fight to Williams, had the better of the first round.
And when he began getting through in the second, Williams’ legs stiffened almost immediately, his footwork that of a novice.
Dropped by a left – he beat the count – he was finished off when Chisora dumped him through the ropes seconds later.
The form book had suggested such a result – Williams had lost against Carl Baker two fights ago, while Chisora destroyed him in a British title eliminator.
Now unbeaten in 13 fights with eight stoppages, Chisora can look forward to some attractive defences, including a rematch with Commonwealth champion Sam Sexton.
Sexton, who was supposed to box Williams tonight before pulling out for personal reasons, was stopped by Chisora a couple of years ago, but has improved since.
Other options for Chisora include Tyson Fury (pictured right)  and John McDermott.
“Whoever wants to have a go, I’ll accommodate them,” said Chisora. “It feels great to be a champion, but it’s just the start.

For  all Danny was saying about being shot, he caught me with a couple of punches and he’s still get plenty of power.”

Meanwhile Williams, who will always be remembered for his defeat of Mike Tyson and his heart-breaking loss against Vitali Klitschko – goes off to be a bodyguard to the stars, a far safer line of work than taking punches for a living, especially when you’ve got nothing left to give. www.frankwarren.tv
Undercard 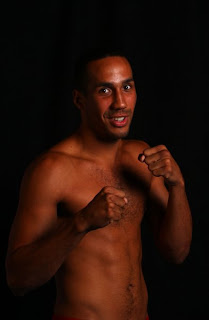 James DeGale won his sixth successive fight since turning pro when he stopped a courageous Sam Horton in the fifth round of their super-middleweight contest at Upton Park.


In his first schuduled 12-rounder – for the vacant WBA intercontinental title – the former Olympic Gold medalist again impressed good finish once he had his man going.


Brave Horton, a bus driver by day and the former Midlands Area champion, had only lost once in 16 previous fights and was outclassed by the flashy Londoner, who let his array of punching talent go on Horton.


“I felt great in there I could have done 15 rounds,” he told Sky Sports. “It was good, I’m glad it went four or five rounds as I need the rounds.


“I’m not disrespecting the guy but I was practising in there, stuff we worked on in the gym, I was just practising.


Olympic medallist Billy Joe Saunders 20, made it six wins out of six, winning his fight on points having been taken the distance by Huddersfield’s Andy Butlin.


The super-middleweight, who won bronze in Beijing, had been out of the ring a while due to a damaged hand, and it looked like he had hurt it again, by the end of this fight.


“I’ve been out for five months so it’s not going to be how I was when I first started out, but I’m pleased I’ve got the win and another six rounds under my belt,” he told Sky Sports.


“It was about a six out of 10 tonight but I enjoyed getting the rounds in. To be honest, the hand was fine all night until the fifth, when I felt a little twinge.


“It wasn’t so bad that I had to stop like before, but from the fifth I pulled it back for my own safety and next time I’ll have got rid of the ring-rust and can put in a better performance.”


The referee stepped in with 53 seconds remaining after Tait had been staggered by a barrage of punches from the 24-year-old.


Walsh brothers Ryan and Liam, both celebrated first round wins.

Ryan performed a somersault after taking just 49 seconds to get rid of Eugene Heagney, a decent win against an opponent who had only been stopped in Irish title fights.


Following his brother into the ring half an hour later, Liam didn’t hang around too long either, halting game but limited Ibrar Riyaz to complete a perfect night for the family.

Craig Evans, scored the quickest finish of the night, when he came out punching against Dann Carr and didn’t let up until it was stopped 39 seconds later!


Carr wasn’t happy that it was waved off, but he failed to throw a punch and was being overwhelmed.


Ricky Burns kept busy ahead of his potential world title shot against Roman Martinez with a straightforward points victory over Yousef Al Hamidi.

Hamidi rarely gets stopped, and it was no surprise to see him still there, as slippery as ever, at the final bell. For once though he didn’t pose too many problems, with Burns well worth his 80-73 victory. He now awaits confirmation – or otherwise – of his crack at WBO champion Martinez.