Khan vs Malignaggi fight in jeopardy 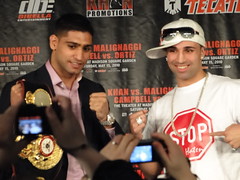 Amir Khan’s, world title defense against Paulie Malignaggi at Madison Square Garden on May 15 looks like it’s in jeopardy with Khan still stuck in Vancouver, Canada awaiting a work visa.
Khan has been in the U.S., training with Freddy Roach at the Wild Card Gym in Hollywood on a tourist visa for the last few months. When his work visa application, which he submitted in March, hit a snag he went to the nearest British consulate across the Canadian border in Vancouver to expedite matters. What he thought would take a day has turned into 10 days as of Thursday.
Khan has been putting in the final preparations for the fight while shacked up in Canada with his team.
22-year-old from Bolton said he had never had any problems when traveling outside of Britain. “I didn’t have any problems when I came here and I haven’t had any problems anywhere I’ve gone,” he said.
But Khan added, he believes the fact that his name is ‘Khan’ is causing the delay in the US authorities making a decision.
“The delay has nothing to do with any driving convictions, it is down to the fact that my second name is KHAN” he added.
The delay was also causing anxiety for Khan’s promoters at Golden Boy Promotions and for Malignaggi’s promoter, Lou DiBella of DiBella Entertainment as well as the fighter himself, who seemed frustrated that the fight is being called into question, saying he is as frustrated as Khan over the process.
“It seems so simple,” Malignaggi said. “This guy is coming here to work. Let him in. All you have to do is Google his name and you’ll find out that he’s coming here to fight and defend his championship. It’s been in the news all over the worldwide media. I believe this guy is clean and he’s coming here to fight.
“I know you have guys trying to blow up Times Square and in the past guys who have tried to blow up buildings in Manhattan. How do those guys get into the country, but this guy whose coming here to work can’t get it? It’s very frustrating. Let him in.”
DiBella said there are no contingencies in place if Khan doesn’t get his work visa and can’t make it to New York for the fight.
“I’m trusting that he’ll be in New York on Monday and we’ll have a fight on Saturday night,” DiBella said. “What kind of contingency plans can you have in place? I’m not thinking about that because I have no reason to believe that I have to.”

This fight has to take place, otherwise the US’ authorities will be putting there motives and Visa acceptence system case reviews into question, when clearly to all, a world champion defending a world title is a genuine case of traveling workman if ever there was one, sort it out! Doh!

Amir Khan Live radio interview with Steve Bunce, Amir is in Vancouver awaiting his Visa. Amir says he will take on all comers in the light welterweight division, which he sees as the most exciting weight divsion in Boxing.