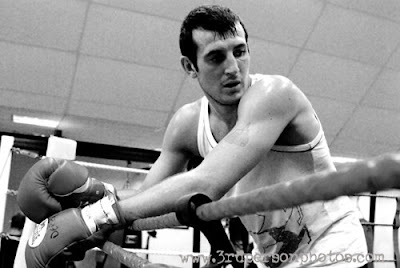 “Doesn’t bother me about defeats, just going to start a fresh, New Derry, New Career and New team.” – Derry Mathews.
Former WBU Featherweight Champion Derry Mathews has announced his return to boxing only seven months after his retirement.
The scouser 26, had hung up his gloves after a sorry defeat to Scott Lawton last November, which was his third knockout loss in a row.
Derry originally turned pro in 2003, winning 19 contests in a row (11 knockouts) on his way to capturing The English and WBU Featherweight Titles with victories over respected boxers such as Stephen Foster Jnr, John Simpson and Matthew Marsh.
Mathews’ career started to unravel in April 2008 after a fifth round KO defeat to Choi Tseveenpurev, after which he went on to be floored and beaten in three of his last four match-ups, leading to his retirement announcement in November.
“Things outside of boxing weren’t going well for me, plus making the weight was a big issue as well.”
Since then, Derry has been enjoying himself away from the sport, relaxing and holidaying with friends, but like most boxers though, the desire to fight never goes away.
In the last few months, He has been concentrating on his boxing project Streetcage Sports CIC Derry Mathews Boxing and Fitness Academy, which helps get kids into fitness and boxing as well as education.
Through this work, his desire for the game has returned “I have fallen back in love with the sport thanks to these kids,” he declared.
Derry intends to box at lightweight and is yet to learn who his first opponent may be. “I am just going to take one fight at a time, whoever the match maker finds for me I’ll take the fight and then I want the British Title.”
“People in the city know how much I want that belt more than anything, so I will be looking for whoever is champ when I am ready for it.”
Derry is currently a free agent and therefore has a lot of options, a few names come to mind straight away like Gary Buckland, Martin Gethin or an all scouse match up against John Watson.
Mathews has been admiring the talent that’s coming through from his hometown, “I love seeing the Liverpool lads doing well, they make u feel proud we have great fighters in this city, Stephen Smith is the best Liverpool Boxer since John Conteh and will prove it when he beats John Simpson next month, then lets hope I can top it off by winning a title.”
Asked whether he would like to avenge any of his four defeats, he replied “Doesn’t bother me about defeats, I am just going to start a fresh, New Derry, New Career and New team.”
Now training with Oliver Harrison in Manchester and with a new focus, Derry has no doubts where he would like to be in 12 months time, “I hope to be sitting here the British lightweight Champion, I know I still have the tools to do it, Its all down to me now to go out there show the real Derry Mathews is back.”
Interview by Phil D Jay for www.britishboxers.co.uk – Phil would like to thank Derry for his time and wish him all the best for the future.