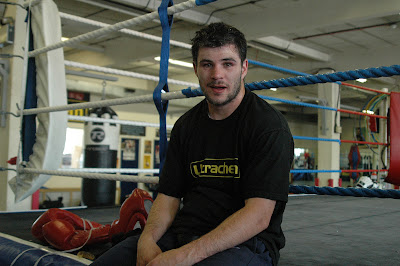 Former British Super Bantamweight champion Matthew Marsh, has been forced to withdraw from the from the Frank Maloney promoted show at the Rainton Meadows Arena, Houghton-le-Spring, Tyne and Wear on Friday 23rd July.
Last week Marsh, who was due to face Kris Hughes for the vacant Commonwealth Super Bantamweight title on the 23rd, was involved in a car crash whilst on his way to the Ultrachem TKO Gym, in Canning Town , to continue his preparations for the bout.
Johnny Eames, Marshs manager and coach, issued a statement today on the incident and the withdrawal from the proposed title fight. There were no other people involved in the accident.
The injuries Matthew sustained were quite severe internal bruising, whiplash and back pains. The hospital put Matt on anti-inflammatories and a very strong pain killer.
When the pain killers wore off in the evening Matt had to go back to the hospital, where they kept him in over night to keep a check on him. He was released the next day.
The doctors say that within the next few weeks he will be fine. Obviously that couple of weeks is the most important time in his training as the specialist sparring was just about to come in.
Unfortunately I had to make the decision to withdraw Matt from the fight, which will be rescheduled.
It is expected that Matthew Marsh versus Kris Hughes for the vacant Commonwealth Super Bantamweight title will be rescheduled for September.
www.ultrachemtkogym.com