British BoxersAugust 9, 2010
LATEST BOXING NEWS0 Comments9 min read
The already heated war of words, between Former English Super Featherweight Champion Ryan Barratt and Mark ‘The Flash’ Alexander ahead of their 11th September title clash on the Steve Goodwin Promoted ‘It’s Personal’ event at York Hall in London, is beginning to turn into a full blown fire-fight.
The fuse for the fiery verbal exchanges, was well and truly lit back in May this year, following Alexander publicly calling out Barratt on Steve Bunce’s BBC London Boxing Hour show.
Things got even more heated when both fighters appeared on the same card at Goodwin Promotions “Summer Fight Night Explosion” back on June 19th. During the post fight interviews both Barrett and Alexander made less than complimentary comments about the other. However the real flashpoint that day seems to have been with the interviewer asking Barratt if he would retire if ‘The Flash’ beat him on September 11th. Barratt angrily responded “If I can’t beat the likes of him I will retire. Boxing is my living and if I can’t beat a loudmouth like him then I will retire rather than become a journeyman.”
Hackney based Alexander, who was far from happy about the comments made back in June, is absolutely fuming over the more recent comments made by Barratt, which were widely published in the boxing press last Friday. In the interview Barratt claimed that “When I look into his (Alexander) eyes I see fear and I know he is scared” and “He is not in my class and this will be shown on the night. He is scared of me and will try to run away all night.” as well as “He will have nightmares about Ryan Barrett after I end his career. He will end up humiliated on the night. I will make him pay for his behaviour.
However it was Barratt’s final comment, “Alexander is coming to get destroyed. I have been in with the likes of Amir Khan, Alexander is a nobody and will leave the arena a nobody.” that seemed to bring Alexander’s simmering anger to the boil.
Following a feisty sparring session, with unbeaten Welterweight Freddie Turner, at the Ultrachem TKO Boxing Gym in Canning Town, London, Alexander vented his anger, over the comments, “He’s making those comments and then says he’s been in with more experienced boxers such as Amir Khan. Man, he was only in the ring something like 30 seconds before Amir knocked him out!
I don’t see where he says he got the experience to worry me from that, unless he means he knows how to hit the canvas without hurting himself.
In that case he sure does have the experience, he’ll be well used to being knocked out. He’ll need that experience as he is going down on September 11th.
Man, he’s got real problems if he thinks I’m worried about him just because he’s been in with Amir, and even bigger problems if he thinks that him being stopped is a warning to me.
Everyone saw what I did to Michael Devine back in April, expect more of the same. This time though I think I’ll just plain knock Barratt out, not down four times like Devine.
He should bring a pillow, I’m gonna put him to sleep.”
Ryan Barrett and Mark ‘The Flash’ Alexander, for the vacant International Masters Lightweight title, will headline the Goodwin Promotions ‘It’s Personal’ event at York Hall, Bethnal Green, London on Saturday the 11th September 2010.
Co-feature on the 11th September sees Ultrachem TKO’s unbeaten Light Middleweight prospect Pat McAleese against the ultra tough Lee Noble. This fight also suits the event’s ‘It’s Personal’ billing as there’s no love lost between McAleese and Noble either.
Expect fireworks as both boxers battle it out for The British Masters Light Middleweight title as earlier this year they battled it out on a Ricky Hatton Promotions show, the result then – a draw! Nuff said.
‘It’s Personal’ also features the British professional debut of the legendary Heavyweight Champion of the World Smokin’ Joe Frazier’s protégé Marianne ‘Golden Girl’ Marston.
Marston, who is now trained in the UK by Derek Grainger at the ‘fight factory’ known as the Ultrachem TKO Gym in Canning Town, will be facing a stern test in the highly experienced Welsh battler Lana Cooper in a four round Featherweight contest.
Rising Light Middleweight star Erick ‘The Eagle Ochieng, who recently defeated Curtis Valentine in the battle of the undefeated, is looking to extend his unblemished record against Brummy hardman Dee Mitchell.
Another Light Middleweight prospect, Michael Norgrove, also looks to extend his perfect record. Norgrove, whose record ot 2-0, has his hardest test to date when he faces Finchley’s Ian Eldridge.
Welterweight John Wayne Hibbert, who also has a perfect unbeaten record, is set to face his sternest test to date when he faces the experienced brawler Kevin McAuley from Halesowen.
Ultrachem TKO’s exceptional Featherweight discovery, 19 year old George Jupp, is set for his second career fight against the highly experienced Latvian Pavels Senkovs.
Unbeaten prospect Tony “The Conqueror” Conquest is set to face one of the most experienced Cruserweight’s around, Hastings Rasani, who has fought the best the division has offered over the years, David ‘Hayemaker’ Haye, Troy Ross, Bruce ‘Lionheart’ Scott, Terry Dunston, Mark Krence, Tony Bellew, Dean Francis.. and the list just goes on. This is no easy fight for Conquest, who will need to be right on his game.
Another Ultrachem TKO Gym discovery, Portsmouth’s Light Heavyweight Joel McIntyre, the protégé of WBU Light Heavyweight World Champion Tony ‘Oakey Kokey’ Oakey, will be making his highly anticipated professional debut. Joel will be facing Welsh banger Jamie Ambler. 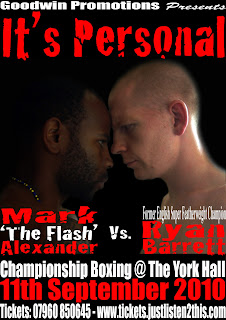 Super Middleweight Eder Kurti will be looking to maintain his six fight winning streak against Sabie Monteith.
Bethnal Green’s highly popular Light Welterweight Jamie Arlain is set to explode on the professional scene. Arlain will be facing Bulgarian Danny Dontchev.
Exciting Welterweight prospect Phil Gill aka “The Phil Gill Experience” looks to continue his unbeaten record against the experienced Sid Razak.
Also at Welterweight Bobby Gladman, who has a perfect 6-0 record is set for a four round contest against a yet to be named opponent.
Tickets for ‘It’s Personal’ at the York Hall, Bethnal Green, London on Saturday 11th September 2010 are priced £35 (Unreserved) or £60 (Ringside).
For tickets call: 07960 850645, book on-line at www.tickets.justlisten2this.com or in person at The Ultrachem TKO Gym, Gillian House, Stephenson Street, Canning Town, London E16 4SA.