Brave Willie goes down fighting in the Bull ring against Morales

British BoxersSeptember 12, 2010
LATEST BOXING NEWS0 Comments4 min read
Willie Limond bravely failed in his bid to defeat legend Erik Morales in the Plaza Del Toro outdoor bull ring in Mexico City.
.
The Glasgow fighter was stopped in the sixth round of their WBC Silver light-welterweight title bout when he was knocked down three times by the boxer known as El Terrible.
.
With over 50,000 Mexican fans creating a fever pitch atmosphere, Limond was able to block out the noise, keeping his composure and nerve to make a great start to the fight, using good movement and quick foot work, the Scotsman was able to hold his own and at times outbox Morales, up until the stoppage Limond was in front on my score card.
.
Fighting at altitude 7,800 feet above sea level in Mexico City, before a partisan crowd against one of there own, is one thing, when that opponent is a fighter of the calibre of Erik Morales then that’s another.
.
Former Olympic Silver medalist Limond made a good start to the fight giving Morales plenty to think about and caught the Mexican with some good shots, and the home fighters right eye began to swell around the third round as he struggled to evade Limond’s evident speed advantage.
. 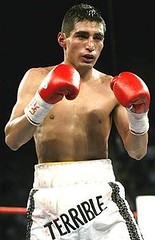 Gradually, the Mexican began to close in on Limond and was able to cut off the large ring and trap Willie who began to slow as the rounds wore on.
.
By the sixth round both fighters were sucking in air in gulps but the seasoned experience of Morales (right) took hold when he unleashed a barrage of punches to Limonds head and body the latter causing Limond to wince in pain as the liver shot dropped him to his knee.
.
Limond was able to get back up and continue fighting, but Morales wasn’t going to let it chance to get the capable Scot out of there go, Morales, who the last man to beat pound-for-pound king Manny Pacquiao smelled victory, and systematically with sickening body shots dropped Limond twice more before referee Jay Nady waved the fight over.
.
Limond though went down fighting and was throwing big hooks to try and catch Morales as the end drawn closer hoping to catch the Mexican, Limond can be proud of his performance and will travel back to Scotland knowing he did his best against a true ring great.
.
Willie Limond 31, was under no illusion about the enormity of the challenge he faced by travelling to Mexico City to take on Morales. But fought with confidence and guts hoping to become Scotland’s second world champion this month following friend Ricky Burns who the WBO super-featherweight title with a thrilling points victory over Rocky Martinez last week, but this was a different proposition than the Kelvin Hall Glasgow, where Burns won in-front of his home fans.-
.
Willie Limond can be proud of himself this morning and take heart from this fight, although he believed he would win the fight and was determined to cause the upset, which was evident in his disappointment when he punched the canvas in frustration when he was dropped.
.
One thing is for sure Limond will never forget his nights experience in Mexico against the fighting legend of Morales and boxing now know more about Limond, he can come again.
.

.
Watch the fight Morales vs Limond
.