Ricky Hatton said to be “devastated and distraught” over coke claims 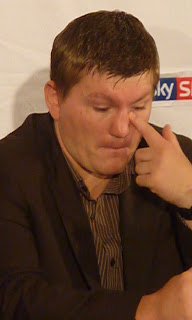 Ricky Hatton was today said to be “devastated and distraught” after being secretly filmed allegedly snorting cocaine.
.
The former two-weight world champion is alleged to have used “industrial quantities” of the drug by the News of the World.
.
Hatton, 31, who has still to officially retire from the sport following a succession of multi-million pound title fights, is captured in video footage appearing to use a credit card to cut lines of cocaine before snorting them through a rolled-up bank note.
.
Today Max Clifford, his spokesman, said: “I have spoken to Ricky just half an hour ago, he is very upset and very subdued, very flat.
.
“He feels he’s let everybody that matters down badly, his friends, his family, his fans and of course most of all himself, that he is, in his own words, he’s been in a bad place for some time, probably before even his last fight and obviously he’s really upset about what has happened but he totally takes responsibility, takes the blame, ’It’s all down to me’.
.
“He just wants to let everybody know how he feels, he’s got to sort himself out.
.
“I think it is fair to say, friends and family have been trying to warn him in recent times, for the last few months and now they are all hoping this situation will bring him to his senses.
.
“I think obviously everybody is hoping some good will come out of this.
.
“He feels devastated and we all hope this will be the wake-up call.”

.
Clifford said he was called by a representative of Hatton last night and asked to speak on behalf of the boxer, who he has known for a number of years.
.
He added: “We have spoken a couple of times today, clearly he’s distraught about it, very upset and very subdued.”
.
The News of the World states the video footage was captured over several hours at a Manchester hotel two weeks ago while Hatton was on a night out with friend Emma Bowe, 29, the Irish national senior women’s boxing champion.
.
She told the paper Hatton also binged on drink by sinking 11 pints of Guinness, vodka, wine and sambuca during the night out.
.
“I’m only talking about this because Ricky is a danger to himself. If he carries on like this he’ll kill himself,” she is quoted saying.
.
“I’m really, really worried for him, especially if he tries to make a comeback in the ring as he’s hinted – he could have a heart attack.”
.
Bowe added: “I was dumbstruck and felt bitterly disappointed. Ricky was my hero and to see him abusing drugs was such a letdown. He was a real role model, I didn’t expect that of him.”
.

Hatton, who still lives close to his hometown of Hyde, outside Manchester, with his fiancee Jennifer Dooley, became a household name and huge favourite of boxing fans for his no-holds-barred fighting style.

.
Hatton, who has a nine-year-old son and was awarded an MBE in 1997, is now heavily involved in promoting other boxers, having not fought himself for more than a year.
.
The former world champion at both light-welterweight and welterweight, was knocked out in the second round at the hands of Manny Pacquiao in Las Vegas last May.
.
Despite the comprehensive defeat, Hatton has yet to confirm his retirement from the game and even hinted at a return to the ring by recently renewing his boxer’s licence with the British Boxing Board of Control.
.
A potential ’super-fight’ against fellow Briton Amir Khan, the current WBA light-welterweight champion, has been mooted.
.
Any return to the ring may now be in jeopardy following today’s accusations.

In an article by Stef Charlton for renound boxing website www.livefight.com Charlton asks the question who were the other lines  set up for,? Considering Mrs Bowe, who was apparently the only other person in the room and is against the drug? They must have been for Ricky too? But he can possibly be heard to say “There you go” looks like cocaine makes you talk to yourself too. read Colemans article below.
Holes in Hatton sting story

With all the talk around ‘fallen’ idol Ricky Hatton in today’s News of the World newspaper and his use of class A drug cocaine, we took a look at what is quite obviously something more sinister.

.
As you read this article, your now probably expecting us to dissect Hatton and his ‘shameful’ or ‘misguided’ ways. To take the moral high ground and lambaste Hatton in his darkest hour.
.
Well your mistaken.
.
Yes, Hatton has let himself down – and I’m sure his fantastic parents and sibling Matthew are mortified this has hit the national press. Yes, Ricky needs to pull himself together and address this lifestyle of boozing and hard drugs.
.
BUT, putting Ricky’s Crucifixion to one side for a moment, let’s take a look at the parties that have brought us this ‘incredible breaking story’ or ‘set up’ as I would prefer to call it.
.
For starters, this so called ‘Friend’ and I use that term loosely was obviously a cunning turncoat.
.
“I was dumbstruck and felt bitterly disappointed. Ricky was my hero and to see him abusing drugs was such a letdown. He was a real role model, I didn’t expect that of him.” said Emma Bowe to the News of the World.
.
So disappointed that she forecast this ‘shock’ and left hidden cameras all over a hotel room to snare Hatton into taking cocaine ? we must ask ourselves what sort of person leaves multiple cameras in a hotel room, watching every hard surface possible in the hope of capturing that ‘money shot’ of Ricky indulging.
.
Likewise the reader must also wonder, if she was so innocent and shocked in all of this matter… why does the story allude to just the two of them in the hotel room. Bearing this in mind whilst watching the video, Ricky completes a line of cocaine before preparing another line or two out of courtesy for the other person in the room.
.
Also Ricky can be possibly heard saying “There you go” after finishing a session to the other person in the room. Could it be Ricky is not indulging on his own? that would alleged that the other person in the room, Emma Bowe is possibly partaking too? that is the question that sprung to my mind.
.
Whilst in conclusion it is a disappointing scenario that has shamed boxing and Ricky’s immediate family and associates, it must also been seen for what it was – a trap.
.
Whilst we would never condone the use of banned substances and are disappointed with Hatton’s exploits, the focus of our minds is the way this ‘friend’ Emma Bowe orchestrated and sold Ricky down the river to a tabloid for ‘his own good’.
.
I wonder if payment was made to Emma for her act of salvation ? usually if it isn’t then it’s clearly stated by the newspaper. In this case it has not, so we can only assume that Emma’s selfless act was rewarded.
.
Ricky gets help….Emma, get a life !