‘The Boyz Are Back In Town’ for Newark Fight Night Nov. 20th 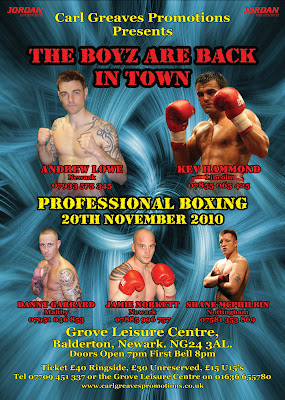 Former WBF Super Featherweight World Champion Carl Greaves will be featuring local fighters at his upcoming ‘The Boyz Are Back In Town’ event at the Grove Leisure Centre in Newark, Notts on Saturday 20th November.
.
Headlining the show will be former International Masters Light Middleweight Champion Kevin Hammond, who will be looking to turn round a three fight loss run, against Luke Osman
.
Hammond, who following his winning the International Masters title had two tough fights with recent British title challenger Martin ‘Immaculate’ Concepcion for the Midlands Area title,
.
Hammond came close to winning both, even sent Concepcion to the canvas on their second meeting, as in each case only one point was the difference between the two.
.
In his most recent bout, against Kurt Bromberg for the British Masters Middleweight title, again Hammond fought hard and was unlucky not to get the decision. Again the points difference was just a single point.
.
There will be five exciting match-ups supporting the Hammond versus Osman bout. Co-feature fight sees Newark’s Andrew (A.A.) Lowe take on tough Bristol based Turk Rocky Chakir in a six round Welterweight contest.
.
Next up, and probably deserving of headline status, is the highly popular Bulwell, Notts Cruiserweight/Heavyweight Shane McPhilbin will face a stern test against the highly experienced Brummy bruiser Hastings Rasani in a four round Cruiserweight clash.
.
McPhilbin recently stole the limelight from his more experienced competition at the Sky televised Prizefighter – Heavyweights 4 tournament, after stopping the previously unbeaten Declan Timlin after just fifty seconds of the second round. McPhilbin then went on to face eventual tournament winner Michael Sprott in one of the most exciting action packed bouts of the evening.
.
Rounding out the show will be two debut bouts, the first at Light Heavyweight, featuring Newark’s Jamie Norkett against new boy Ian Jenkins and Danny Gerrard gets his maiden outing against the highly experienced Ryan Clark. The final listed bout features Sneinton, Notts Terry Maughan in a Middleweight contest against a yet to be named opponent.
.
The Carl Greaves Promoted ‘The Boyz Are Back In Town’ event will be at the Grove Leisure Centre, Balderton, Newark. NG24 3AL on Saturday 20th November 2010.
.
Doors open 7pm – First bell 8pm
.
Tickets: priced £15 (Under 15’s), £30 (unreserved) and £40 (ringside) are available now on-line at www.tkoboxoffice.com or call 07960 850645.