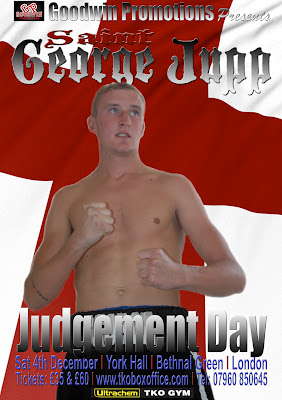 With just two pro fights under his belt Belvadere’s ‘Saint’ George Jupp is already proving to be something of a sensation. So much so that promoter Steve Goodwin has invited George to be part of his double title headlined super show ‘Judgement Day’ at the York Hall, Bethnal Green, London on Saturday 4th December.
.
The invitation from Steve Goodwin follows George’s exceptional performance, against Latvian hard man Pavels Senkovs, at his ‘It’s Personal’ event back in September, where George thrilled the York Hall crowd with a true boxing master class.
.
Right from the opening bell ‘St George’ plain outclassed Senkovs with slick long jabs and lightning fast hands. Senkovs constantly tried to bully his way back into the fight but nineteen year old George showed a maturity that belied his tender age, by not being drawn into a dangerous toe-to-toe slugging match. After four scintillating rounds George was rewarded with a shutout 40-36 points decision, as well as a much deserved standing ovation from the packed house.
.
Following a sparring session with Ian Bailey, at the Ultrachem TKO Boxing Gym in Canning Town, London, George spoke briefly about his performance against Pavels Senkovs and his preparations for the upcoming fight. “That was a good fight, Pavels’ a come forward type but I kept to my boxing, just picking him off with my jabs and hard right shots. I just stuck with my boxing and won it easily on points.
.
Every time I fight I improve a little bit. I boxed well before but when I watched the dvd there were some things I think I could improve on or moved back to a different thing.
.
I’m not going to give anything away but we’ve been working on some new stuff in the gym so at my next fight there’ll be a few new tricks.”
.
‘Saint’ George Jupp against a yet to be named opponent will be on the support card when Yassine El Maachi defends his International Masters Light Middleweight title, against the seriously tough France based Haitian Jimmy Colas at the Steve Goodwin promoted “JUDGEMENT DAY” double title event at York Hall, Bethnal Green, London on Saturday the 4th December 2010.
.
Co-headlining ‘Judgement Day’ will be Ryan ‘Mr Attitude’ Barrett who will be defending his newly won International Masters Lightweight title, against a yet to be named opponent.
.
There are no less than twelve top class support fights including the highly anticipated all girl Featherweight clash, between George’s Ultrachem TKO team mate Marianne ‘Golden Girl’ Marston, and the highly experienced Welsh battler Lana Cooper.
.
Fresh from his superb victory, over veteran Hastings Rasani, the highly popular Essex Cruiserweight Tony ‘The Conqueror’ Conquest will again be in action and looking to extend his unbeaten record against a yet to be named opponent.
.
Conquest’s gym mate, the highly entertaining Welterweight John Wayne Hibbert, will be making his welcome return to the York Hall. The Stetson wearing Hibbert is an all action fighter with a knockout reputation – four stoppage finishes in his six outings to date.
.
Waltham Abbey’s Phil Gill, AKA ‘The Experience’, will be looking to increase his unbeaten record to seven, whilst Light Middleweight War Lord Michael ‘The Zambezi Hitman’ Norgrove will be looking to take his unbeaten record to four.
. 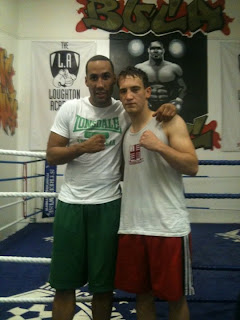 Bethnal Green’s own Jamie Arlain gets his second outing, against Islington’s John ‘The Gorilla’ Ryder, and will be looking to emulate his stunning debut victory.
.
So far Ryder has had just 90 seconds of ring action. it taking him just half a round to beat the hapless Ben Denghani into submission.
.
Arlain he is improving all the time and has been sparring with James DeGale that as helped to sharpen his skills since his pro debut.
.
“I’m adapting to the pro ranks and enjoying it, learning new things and listening to what my trainer tells me, I practice different things, Im improving since my last fight in september practice makes perfect . said Arlain.
.
“It was my pro debut so I was nervous and sort of didn’t know what  to expect, I am learning my trade and am excited and can’t wait to get back in there and just wanna say thanks to everyone who’s supporting me it’s been great. added Arlain.
.
Another single fight veteran with an early knockout record is Ely, Cambs Light Welterweight Tyler Goodjohn. His first victim, Dale Hutchinson, staying the course 264 seconds longer than Denghani did with Ryder.
.
Rounding out the show are three debutants. Super Featherweight Richard Hines, Light Welterweight Charlie Kelly and another of George’s Ultrachem TKO Gym mates Super Middleweight Brett O’Callaghan.
.
Tickets for Judgement Day at the York Hall, Bethnal Green, London on Saturday 4th December 2010 are on sale now – priced £35 (Unreserved) or £60 (Ringside).
.
For tickets call: 07960 850645, book on-line at www.tkoboxoffice.com or in person at The Ultrachem TKO Gym, Gillian House, Stephenson Street, Canning Town, London E16 4SA.