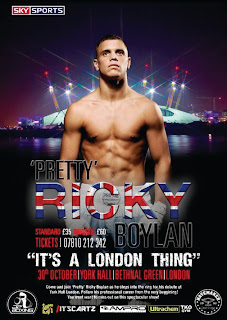 After a successful seven year, eighty fight career as an amateur boxer, ‘Pretty’ Ricky Boylan is set for his professional debut on the undercard of George ‘The Saint’ Groves’ Commonwealth title defense at the York Hall, Bethnal Green, London, on Saturday 30th October, against the tough Middlesbrough banger Phil Boyle.
.
Ricky, who is managed and co-trained by Johnny Eames at the Ultrachem TKO Boxing Gym in Canning Town, signed professional papers following the controversial loss to Marlon Mellish in the London ABA finals earlier this year.
.
Following a training session under the watchful eyes of his co-trainer Derek Grainger, Ricky spoke about his upcoming debut, “I’m really looking forward to fighting on October 30th. George (Groves) and I have been friends from our amateur days and I’m so pleased to be on his show.
.
I’ve been training for a while now so I am so glad that the date has finally come up. I was meant to be signing with someone else, then George’s date come up which was a good thing really. I’m really grateful to finally get to box on October 30th.
.
I’m really ready for this, I’ve been sparring Ben Murphy a lot. Also sparred George Jupp, Marlon Mellish and done a few rounds with Matthew Marsh, Dean Byrne, Pat McAleese and Daniel Herdman.
.
It’s been seriously tough sparring with good fighters and I’m learning new things everyday, the more sparring I’ve been getting has had me improving all the time.
.
Come October 30th I will be so ready. I enjoy a tear up but if Phil Boyle wants to box, I will box”
.
Ricky then went on to talk on his amateur career, “I had 80 odd fights (as an amateur), won the novices but as a senior never actually won a National title, but got to five National finals. I mean, I got beat in the London ABA’s this year, just before turning Pro, didn’t think I got beat but that’s Amateur boxing for you.
.
I think the pros will suit me a lot better than the amateurs did. It’s the style really, it’s all tip-tap and then run away, I don’t know it just didn’t suit me. I know the pros will as everyone will see on October 30th.”
.
Ricky’s aggressive, all action, boxing style may well have hindered him throughout his stellar 80 fight career, due to the rather limiting amateur scoring system, but will surely win him a huge legion of followers now he has made the transition to the pro ranks.
.
‘Pretty’ Ricky Boylan’s pro debut against Phil Boyle will be on the undercard of the George ‘The Saint’ Groves Commonwealth title defense against James Obede Toney on David Haye’s Hayemaker Promotions ‘It’s A London Thing’ event at York Hall, Bethnal Green, London on Saturday 30th October 2010.
.
It addition to Ricky Boylan versus Phil Boyle there will be five further top class bouts on the undercard. Main support features Aylesbury’s Nathan Graham against Craig Windsor Jr in a light Middleweight battle and Bristol’s exceptional Light Welterweight prospect Darren ‘Mr R&B’ Hamilton locking horns with Grimsby’s unbeaten Kevin Hooper.
.
Unbeaten Light Heavyweight Menay Edwards and Ricky’s Ultrachem TKO team mate Middleweight Daniel Herdman make up the rest of the card against yet to be named opponents.
.
Tickets, priced £35, are available on-line at www.tkoboxoffice.com – in person at The Ultrachem TKO Gym, Gillian House, Stephenson Street, Canning Town, London E16 4SA or call 07960 850645.