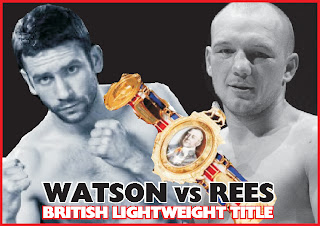 Gavin Rees the former WBA light welterweight champion of the world and recent Prizefighter winner is moving down in weight to fight Liverpool’s former ABA champion, the undefeated John Watson for the vacant British Lightweight title at the Newport Leisure Centre tonight.

.
Both fighters have weighed in for the fight, with Ree’s scaling a trim 133lbs 7oz and Watson at 134lbs, 15oz.
.
This is a chance for Welshman Ree’s to get back to the dizzy heights he experienced when he won the world title against Souleymane M’baye in July 2007 and to move into world class again.
.
For Watson it is also his big opportunity to fulfill the potential he has been showing and prove that the attention and predictions of success that are being bestowed on him are justified.

Watson 27, will be up-against not only a former world titlist, who as only lost once in 33 fights – against Andriy Kotelnik in his first title defence – but Ree’s home town crowd will be right behind their man.
.
But a confident Watson says that his boxing brain will be the key to over coming the experienced Welshman and an hostile reception towards him will do nothing but spur him on to win this intriguing battle.
.
“Yes, he’s fought for the world title and has the experience but I’ve got the boxing brain. He won the WBA title by taking his chance against Souleymane M’Baye and now it is my turn.
.
“I hope the home fans are roaring because the 150 or so Scousers that are coming down to the fight will be shouting their heads off. I hope it is a hostile Welsh crowd because I’ll thrive off that.”
.

After a break of 18 months after his world title loss, Rees came back in style, he moved down in weight and left long-term mentor Enzo Calzaghe to join Gary Lockett, he then impressively beat three former European champions to claim the light-welterweight Prizefighter trophy, two more victories followed and now the chance of a British title shot he has earned.
.
Rees has dismissed claims from Watson’s trainer David Coldwell that he hasn’t fought anyone of note other than world title opponent Souleymane M’baye and Kotelnik who beat him and other than the Prizefighter contenders he beat.
.
Coldwell noted that Rees’ other opponents haven’t been up to scratch, but the loss to Kotelnik, Rees puts down to him being out of shape and not prepared.
.
But the Welshman as warned Watson he can expect a fully-fit and focused boxer when the two of them meet, something the Welshman couldn’t attest to against Kotelnik.
.
He has admitted he shouldn’t have faced the Ukrainian because his preparation wasn’t up to scratch.
.
“I was lackadaisical and probably shouldn’t have fought Kotelnik, but I was world champion and had to defend my belt,” he said.
.
“I took it for granted and didn’t train like I have for this fight.
“I’m feeling better than ever.
.
“I’ve got a sports nutritionist on board and I’m a lot more dedicated now – I’m like a machine.
.
“I’m 30 and it’s probably my last chance, but I’m not even thinking of losing.
.
“I’m in the best shape I’ve ever been in and it’s probably the lightest I’ve been in eight years.”
.
Whatever happens in the fight it is sure to be a very interesting clash of styles, Watson the very gifted and schooled boxer, against the pressure come forward style of Rees. Styles make fights and this fight will be decided on who can impose theirs on the fight first.
.

Watson doesn’t posses big knockout power, with the 8 of his 13 wins on points, where as Rees boasts more KO wins than Watson as had fights, 18 KO’s in 33 contest’s and as campaigned at a much higher level than the Scouser.

Rees is the bookies favorite to take the win with William Hills at 4/7 – they have it John Watson 13/10 and for a draw 25/1.
.
The underdog Watson will look to outbox Rees and will need to really stamp his authority on the fight to stop Rees’ powerful attacks, but I believe he will be able to do that winning a unanimous decision and proving why he is so highly rated in the North of England, but it wont be easy and may have to show his Liverpool grit along the way.

.
The fight can be seen tonight Live on SkySports HD 1 from 9pm.
.