British BoxersDecember 12, 2010
James DeGaleLATEST BOXING NEWS0 Comments8 min read
James DeGale stopped Paul Smith in the ninth-round to claim the British super-middleweight title in only his ninth fight on Saturday night.
The Olympic gold medal winner DeGale 24, a professional novice on paper was taking a big step up in class to challenge the tough scouser for his Lonsdale belt, but shown a patient maturity in his work to eventually find a way through Smiths work before finally forcing the stoppage.
Smith, 28, with 29 wins and only 1 defeat coming into this fight, had never been stopped previous and had large vocal home advantage at the Echo Arena, entering the ring to a crescendo of noisy cheers from the Liverpool crowd, who had just jeered DeGale on his ring entrance.
DeGale was warned early for use of the elbow after only a few seconds of the fight but looked to take centre ring and take a hold on the fight which he succeeded in doing and although Smith tried all angles and ring know how to get the upper hand in the fight and draw DeGale onto his punches everything he tried, DeGale had the answer to it.
The challenger began to build a lead in the first three rounds and was growing in confidence as he realised Smith wasn’t quick enough to catch him clean.

There was a clash of heads in the fourth round which caused a cut above the right eye of Smith,

a wound that by DeGale was beginning to pepper with his southpaw jab. Smith didn’t let the cut bother him and continued to battle on for his treasured British title, landing a big right in the round as DeGale on the ropes, but DeGale quickly re-grouped before taking control of the fight from the champion again.

Smith’s corner beckoned their man to get into DeGale and make the fight a brawl at close quarters, and coming out for the sixth round with some better work, but after initial success was met by a couple of big left hooks from DeGale as he came into range.
The impressive DeGale was starting to nullify Smith’s work and he wobbled the champion in the eighth after a cute uppercut inside knocked Smiths head up and back while un-steadying his legs, It was a shot that the champion never fully recovered from.
Then in the 9th round Degale hit Smith with a swarm of heavy shots and it was testament to Smith’s resilience that he managed to take the big shots coming from the challenger without going down.

The Liverpudlian seemed to recover well from the first barrage of shots but when another hard  left hand and a combination of unanswered blows, referee Foster waved it off to Smith’s protests.

The fight did seem to be stopped a little prematurely, Smith is a proud fighting man and would have gone down fighting, but should have been given a bit longer to try and clear his head and weather the storm, this is the British champion and deserved every chance to try and hang onto it, having said that the writing looked on the wall anyway and maybe Foster knew that.
It was a real good performance from DeGale who walked the walk after all the talk, and if he can simmer down the amateur dramatics during and after his fights, he could grow on the British fight fans a bit more than he is, because there is no doubting he is a boxer of high standards, who as taken to the pro ranks like a duck to water.
DeGale insisted afterwards that he even surprised himself with his performance.

“After the first round I thought ‘oh my God, this is easy'”.

“In the first round I said to him, ‘fight me’. He’d talked so much about what he was going to do so I told him to fight me.

“People underestimate the strength of my punching power. I’m so chuffed, so happy.” 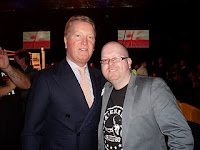 British Boxers corespondent and editor of our sister website www.worldboxingnews.net was at ringside in Liverpool to bring us the results as they happened, and mixing with the boxing world at ringside, here is Phil D Jay with Frank Warren the promoter for tonight’s ‘Return of the Magnificent Seven’ boxing card at the Echo arena.

The unbeaten 23-year-old Welshman was made to work hard for his win against the a determined challenger and was
not at his best, with a laboured performance by his previous high standards.

Mohammedi was a late replacement for the fight and Cleverly may have been thrown by the change of opponent but is now
in a position to lay claim to the world title should current holder Juergen Braehmer be sent to prison on Monday,
Cleverly will be upgraded and this win will effectively have secured him the title.

Matthew Macklin had to dig deep to retain his European middleweight title with a laboured points win over Spaniard Ruben Varo.
Joe McNally wins 39-38 In the opening bout over Bertrand Aloa
Billy Joe Saunders beats Tony Randall with a devastating 2nd round knockout

Larry Olubamiwo stops Paul Butlin in the eight and final round.

Paul Butler wins 39-37 On his professional debut.
Joe Selkirk beat Steve Omeara on points.
Tony Bellew successfully defended his Commonwealth light-heavyweight title, by stopping Ovill McKenzie in the round. Bellew had to climb off the canvas twice before coming back impressively.

Liam Smith stopped Matt Scriven in the second round.
Ronnie Heffron stops Wayne downing in just 30 seconds of their fight.