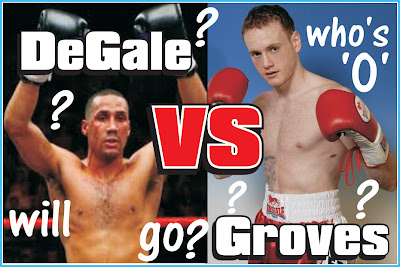 Frank Warren says he is close to making James DeGale against George Groves.
The promoter has been locked in talks with Groves’ adviser, Adam Booth.
And he is hopeful of staging the bout on a blockbuster card scheduled for spring 2011.
If Groves’ team don’t agree terms, the fight will go to purse bids with St George mandatory challenger to DeGale’s British super-middleweight title.
Warren has offered Groves substantial sums before to take on 2008 Olympic champion DeGale.
But Groves was said to have turned down the chance to take on former amateur rival “Chunky” last year.
This time around though, the fight looks almost certain to happen.
“As well as making Klitschko-Chisora, I’m trying to secure George Groves’ signature for a fight against James DeGale,” said Warren in his latest column for The Sun newspaper.
“There are still a few things to agree with Groves’ representative, Adam Booth, but I’m more optimistic of making the fight than an Aussie opener with sun block on.
“The fight will go to purse bids next week if we don’t thrash things out – so it will go ahead one way or another.
“Make no mistake, DeGale is absolutely desperate for it to happen.”
More News from www.frankwarren.tv

I genuinely cant stand him, you know boxing people are usually the nicest people in the world, I couldn’t tell you anyone in boxing who I don’t like except him ‘Destined to Fail DeGale’.
Since we became rivals in the amateurs, hostilities have built up, even though I haven’t really seen him for God knows how long, it as just been there to manifest, but that’s fine by me, because when this fight comes about, you know, its going to be a real fight, I’m here I mean business. I’m not a little kid now at fifteen and him seventeen, sparring as amateurs.” George Groves.