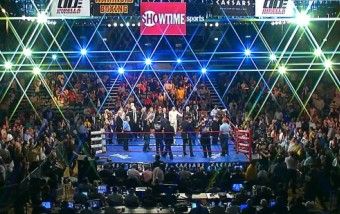 British BoxersFebruary 8, 2011
LATEST BOXING NEWSvideo0 Comments2 min read
Nottingham’s Carl Froch meets veteran war horse Glen Johnson in the semi final of The Super Six Boxing Classic on 21st May and is hoping the fight can take place in the UK.
Froch will be defending his WBC super-middleweight title, whilst fighting to book his place in the final of the tournament and a showdown with US star attraction Andre Ward.
Froch has also spoken about the possibility of sharing the bill in a world title championship double-header with David Haye, who will be defending his WBA heavyweight title.
Froch has said he will fight anywhere but would like a British show for his fans. Speaking in his column in the Nottingham Evening Post, Froch said:
“My Showtime contract stipulates that the semi-final must be held in America. There was talk that Johnson’s team wanted it to be held at the Silverdome at Detroit in America, as they are paying handsomely to lure big fights to the premises.
“But the recent bout between two American starlets Tim Bradley and Devon Alexander didn’t make a huge splash on tickets. So an Englishman and Jamaican may not break that trend, even though we’d make a better fight of it.
“The other ideas we’re receptive to are possible venues in Las Vegas and Canada, both of which I’d have absolutely no problem with.
“If all the interested parties do relax their stance on the American soil aspect of the contract, then perhaps we may well join David Haye on at a London venue somewhere such as the O2 Arena.
“As I keep underlining, I’m pleased to be fighting anywhere – but a big night in London would be a nice change for my loyal Cobra fans who have clocked up the air miles in the last couple of years.’ added Froch.