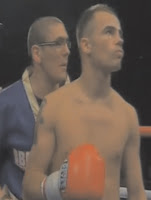 Frankie Gavin impressively stopped the late replacement but game Michael Lomax in the seventh round at York Hall in what was a final eliminator for the British light-welterweight title.
Gavin shown all the skills and moves that had helped him become one of the most successful British amateur boxers and as a professional is now progressing nicely. Developing into a real prospect, who is ready to step up to title level now, and the British and European titles are in his sights.
A late substitute for original opponent Jason Cook, Lomax gave it his best shot, looked in good shape and soaked up a lot of punches from Gavin, who took his time was composed and didn’t ship too many shots back of note from Lomax.
Gavin’s southpaw jab and thumping right hooks, wore down his fellow southpaw. Quality work to head and body gradually wore down Lomax and in the 7th he eventually subsided to Gavin’s pressure.
Lomax did have a good sixth round, bloodying Gavin’s nose, but it was nothing more than a last hurrah and kicked the Anthony Farnell trained boxer into an higher gear and the end was nigh.
A big left hook early in the round hurt Lomax, and the former British title challenger and Prizefighter champion’s head dropped from a powerful onslaught from the Birmingham man. Lomax’ corner had seen enough and launched the towel into the ring at the same time referee Ian John Lewis stepped in to save Lomax, who brave to the end stayed on his feet when it looked like he may have gone over.
Gavin, could well be lined up now for a shot at new British light-welterweight champion Ashley Theophane who outpointed Lenny Daws tonight at Wembley arena over 12 rounds to claim the Lonsdale belt.


Gavin has aspirations to not only step up to British championship level but feels he is ready to move into European class match-ups and is eyeing Paul McCloskey’s European strap.

“I knew I was stronger than him, without a doubt,” Gavin told Sky Sports after taking his record to 9-0.

‘Big Bad’ John McDermott blasted out ‘The War Machine’ Larry Olubamiwo at 1:15 of the first round to win the Southern Area title… read more…

Ahmet Patterson kicked off the show in style, knocking out Wayne Downing inside a minute. Patterson certainly didn’t seem like he wanted to hang around and looks like a prospect that could be a real handful and one to keep an eye on.

Former ABA champion Billy Morgan scored a points win against Robin Deakin, who proved as durable as ever. Morgan won every round to record a 40-36 victory.

Manchester prospect Ronnie Heffron had to work hard to outpoint former Central Area welterweight champion Kevin McCauley over four rounds winning comfortably in the end though 40-37 on the scorecards, but was pushed all the way by McCauley.

Bradley Skeete, out-classing and stopped the brave but limited Johnny Greaves in the fourth round, after having Greaves down in the second and third rounds, Skeete eventually forced the stoppage an intervention in fourth.