McAllister stops Nagy in six and picks up International belt 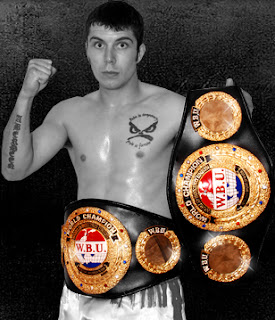 Lee McAllister stopped Hungarian Istvan Nagy in the 6th to claim the IBO International light welterweight title at the Beach Ballroom in his hometown of Aberdeen last night.
McAllister returning to the ring after 13 months out was in control of the fight from the start, in what turned out to be a rough affair at times with heads coming together and McAllister suffering a cut eye in the third round.
The Scottish fighter used the ring well from the centre and his better skills and variety of punch were too much for the ragged Nagy who can be an handful by the looks of it, if you let him get into the fight, but McAllister was never likely to find himself anything but a winner here and continued to push Nagy on the back foot with good hooks to his body and head.
McAllister’s eye gash was holding up well under the attendance of cut man Benny King in his corner, and in round five had Nagy all over the show as he looked to be ready to make a dent in the hardened man from Hungary, but he was able to see the round out, although his card looked stamped now.
‘The Aberdeen Assasin’ wasn’t going to let Nagy off the hook now and was straight in Nagy’s face looking to dig the shots in more after seeing that his opponent was now there for the taking. Nagy eventually touched down from McAllister onslaught on 40 seconds of the round. He rose to his feet on the count of 9, only for McAllister to rain down again on him and referee Victor Loughlin jumped in and waved off the count as Nagy fell for the second time well and truly out.
undercard results.
Dave Cowan was made to work hard by journeyman Delroy Spencer. Spencer now on 126 fights as been in with everyone it seems and always gives the prospects a good workout, a true ‘Have gloves will travel fighter’ and against the unbeaten Cowan was no different. Referee Kenny Pringle eventually scored the contest 58-55 in favour of the Scottish youngster, who was made to earn his victory.
Ayrshires George “Bad Boy” McIlroy outpointed Midlander Sid Razak over 6 rounds – 60-55