Born in Pontypridd, Wales on March 5, 1886, Frederick Hall Thomas. Welsh worked in an iron factory and as a teenager travelled to find his fortune. Welsh never found his fortune though and ended up penniless, but while he was there the Welshman fell in love with boxing after witnessing a workout inside a Philadelphia gym.
He turned pro in 1905 and fought under the name of Freddie Welsh. He was also known as “The Welsh Wizard.” He returned to Wales and became an hero, still remembered by the people he touched and boxing historians alike.
This fantastic documentary about the great man tells the story of his journey to America, his rise from nothing to become one of the best known and popular boxers in the world.
From a scrap book was found in the attic of Welsh’s home by his daughter it was donated to the National Library of Wales. Trevor Fishlock opens the pages of this rare archive containing press cuttings covering ‘The Welsh Wizards’ careers which were possibly assembled by Welsh himself. 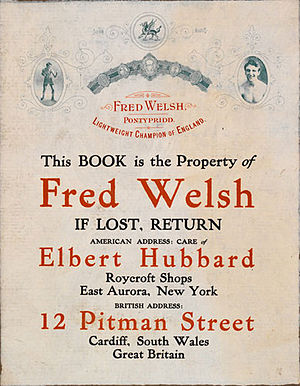 The reports open up a career and story that were gripping the boxing fans of the day, taking us back to this by gone age of the fight game, telling us brilliantly the life and times of this great British boxing enigma. Enjoy.

Freddie Welsh a great practitioner of defensive boxing. In the ring, he was calm, elusive and a frustrating opponent for those who relied on power and aggression. He welcomed the opportunity to fight a brawler, fully confident that he would be able to out-slick him.
Welsh never shied away from tough competition, meeting Benny Leonard, Willie Ritchie and Ad Wolgast three times and Packey McFarland twice.

A true boxing scientist, Welsh was a clever counter puncher who believed in feinting and shifting his body to draw his opposition out of position.

He campaigned in Pennsylvania through 1906, and for a brief period in 1907 he fought a series of bouts in his birthplace of Pontypridd, Wales.

The slick boxer returned to the United States and rose to prominence in 1908 after the McFarland bouts. He lost the first contest but fought to a 25-round draw with the great McFarland in their second encounter. Welsh closed out the year with a 15-round decision win over reigning featherweight champ Abe Attell in a non-title fight. In 1909, he won the British lightweight title and in his first defense he faced Jem Driscoll, who was disqualified in the 10th round.

In 1914, Welsh won the world lightweight title by decisioning Ritchie in London. He sandwiched successful title defenses against Wolgast and Charlie White around a non-title win over Leonard. But when he met Leonard again in 1917, with the title on the line, Leonard scored a ninth-round knockout.

Among the other legends Welsh met were Johnny Dundee, Battling Nelson, Rocky Kansas and Johnny Kilbane.

Welsh served as a lieutenant in World War I and helped disabled veterans at Walter Reed Hospital. He was discharged a captain and returned to the ring in December of 1920. He fought five times over the ensuing 16 months and retired after dropping a 10-round decision to Archie Walker in 1922.