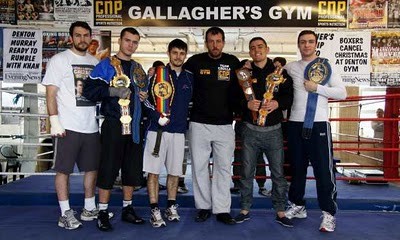 Chris MaylettMarch 8, 2011
#MurrayCrollaLATEST BOXING NEWS0 Comments2 min read
The Manchester gym of Joe Gallager boast the longest winning streak of any other boxing camp in Britain, with a record 43 fight unbeaten run between the boxers in the camp.
European champions John Murray and Matthew Macklin, including British champion Anthony Crolla lead the way as they push for world title opportunities, that seem not far away.
Former British super-middleweight champion Paul Smith and brother Stephen, who is the current commonwealth featherweight champion are new welcome additions to the gym.
Brother of John Murray Joe, a former top amateur and Olympian is highly touted and making good progress and is looking at a domestic title challenge this year.
Among some of the younger fighters coming through are Marcus Morrison, Hosea and Zak Burton and one fighter in particular who looks like a real prospect and really caught our eye Mark Heffron.
BritishBoxers spent a day at Gallagher’s to watch the boxers train and spar and interview the boxers at this gym at the top of an old warehouse building at the back of the Betta Bodies weight training gym owned by Kerry Kayes.
The gym, which was the base prior to Gallagher taking over of former world champion Ricky Hatton and the buzz inside and the quality champions and fighters training side by side makes it almost the UK version of Freddy Roach’s Wildcard gym in Los Angles, where Manny Pacquaio and Amir Khan currently train.
Gallagher’s gym is going from strength to strength and big credit goes to head coach and founder, Gallagher, who’s hard work and persistence in the game for many years is now paying off with a team of boxers to rival any others in British Boxing.