British BoxersMarch 5, 2011
LATEST BOXING NEWS0 Comments4 min read
Matthew Hatton’s challenge for the vacant WBC light-middleweight title was hanging by a thread yesterday when his opponent Saul ‘Canelo’ Alvarez twice failed to make the official weight for the fight to take place.
Mexican Alvarez came in over a pound over the official limit when stepped on the scales the first time, ahead of the fight that has been made as a 150lb catch-weight contest in Anaheim, California tonight. 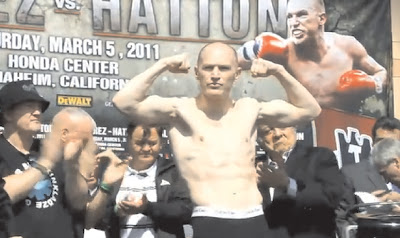 Alvarez was allowed an hour to shed the weight, but the 20 year old only managed to lose less than half-a-pound by the time he weighed in for a second time. 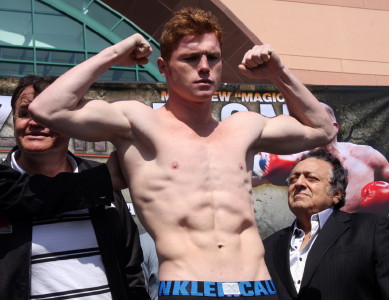 At that stage the fight looked in danger of being cancelled, but negotiations between the two boxing parties resolved the situation with the WBC officials, and Hatton’s world title dream was back on after a nervous wait for confirmation.
Alvarez weighed 151.8, while Hatton came in at 149.6. Alvarez will now lose $35,000 of his purse, which will go to Hatton. This will be 10% of Alvarez’s purse. Alvarez will also lose another $35,000, and that will go to the California State Athletic Commission.
In total, Alvarez will be giving up 20% of his entire purse for Saturday night’s fight.
“At one point we thought it was slipping away but we’ve negotiated a fair bit and we’ve finally got a deal done,” said Ricky Hatton, Matthew’s promoter.

‘Canelo’ is still be the heavy favourite to win the bout and become the youngest fighter to win a world crown at 154lbs.
“This is a huge stage for Canelo, the biggest challenge he has ever faced,” said Alvarez’s promoter, Oscar De La Hoya.
“We think he’s ready for the challenges of this fight and everything that lies beyond it. I really believe he’s the next big thing in this sport. He’ll be bigger than me.”
Matthew is making the move up from welterweight but Ricky is confident that his sibling has what it takes to cause an almighty upset.
The only blemish in a 35-fight career for Alvarez is an early four-round draw.
“He’ll never take a backward step,” Ricky said. “I was worried about him moving up in weight, but after seeing him in the gym, I’m not worried any more.
“As my brother, I’m proud to say he’s made of the same material. We didn’t come here for a payday. We came here to take home a belt.”
Matthew is extremely confident he will be heading back to Britain as a world champion.
“He’s never fought anyone as good as me, anyone as fit and determined as me,” said the European welterweight champion.
“I was highly motivated for the fight in the first place, but to get to fight for the world title motivates me even more. I’ll leave nothing in the locker room.”