Klitschko calls off Chisora fight for the second time

Wladimir Klitschko has called off his IBF and WBO title defence against Dereck Chisora the unbeaten British heavyweight champion- with Haye fight looming for July.
The bout against Londoner Chisora, 27, was originally scheduled for December but was postponed when Ukrainian Klitschko tore an abdominal muscle.
The meeting was rearranged for 30 April in Germany’s SAP Arena in Mannheim. 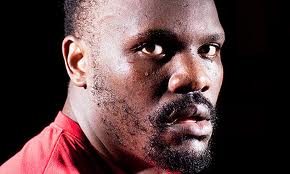 “I am very sorry for this final cancellation especially for the fans,” said 34-year-old Klitschko.
Britain’s WBA heavyweight champion David Haye hopes to take on Wladimir Klitschko in July before meeting his brother Vitali – the WBC champion – in his final fight before retiring ahead of turning 31 in October.
Wladimir’s doctor, Dr. Hans-Wilhelm Mueller-Wohlfahrt, said: “At present the exact timeframe for recovery is difficult to predict. A fight in April would be too great a risk.”
Klitschko added: “I am sure that we will soon carry out a [rescheduled] event in Mannheim.”
But Klitschko did not state whether that would be against Chisora or Haye.