British BoxersMarch 15, 2011
Amir KhanLATEST BOXING NEWS0 Comments14 min read
<br><br><br><br><br><br><br>&nbsp;- vide<br>
Ricky Hatton, for Hatton Promotions today hosted a press conference at the Lowry Hotel in Manchester to announce the undercard for Amir Khan’s defence of his WBA light-welterweight title against British and European champion Paul McCloskey at the MEN Arena on April 16th.
European champion Matthew Macklin who last week was disappointed by the withdrawal of Winky Wright from there proposed fight will be the main attraction on the undercard which includes some of the best talent from the Northwest of England, including Scott Quigg, Martin Murray, Craig Watson and heavyweight prospect Richard Towers.
With prospects Tasif Khan and Adam Etches featuring down the card, the MEN arena is looking like it will be a sell out, with more than 12,000 tickets already sold.

“I am proud to showcase some of the most exiting and talented young champions from the Hatton Promotions stable on what I believe is one of the best undercards that has been staged in the history of the M.E.N. Arena,” said Ricky Hatton, president of Hatton Promotions.
.
“The chief support for this card will see Matthew Macklin take on Khoren Gevor, with the winner looking for a world title shot.
.
“It is the philosophy of Hatton Promotions to stage well matched and entertaining fights. Craig Watson, Scott Quigg and Martin Murray are three champions who are never in a dull fight and who will hopefully be challenging for world titles themselves in the near future,” Hatton continued.
.
“On top of that, we have prospects like Richard Towers, Adam Etches, Tasif Khan and Dezzie Higginson all hoping to make their mark as they move up the professional rankings.” Hatton added.

Below is a list of the boxers appearing on this fantastic fight card, description of career highlights and current details including opponents where applicable at time of going to press. 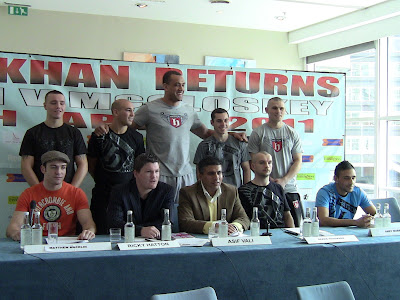 Above is the full presser video by BritishBoxers.
Full card line line up for 16th April, Manchester Boxing Show