Book Review ‘Fighting for something The lives of unlicensed boxers’ 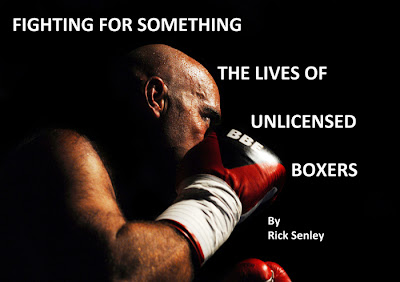 A Book Of Photographs And Interviews From The World Of Unlicensed Boxing – by Rick Senley
From hardened criminals and armed robbers, to ex-pros desperately trying to make money; street fighters and bare-knuckle brawlers, bouncers and minders, salvation in Jesus and broken bones, and life’s meaning within the ropes, this is the dark world of unlicensed boxing.
From the underworld to the church and back, Fighting For Something – The Lives of Unlicensed Boxers – is a collection of photographs from the ring and behind the scenes, with unflinchingly honest stories from the men and women who risk their lives for a few hundred pounds a fight.
Where is man’s role in today’s increasingly emasculated society? Brutal but poignant, Fighting For Something gives boxing’s unheard fighters a voice to tell the world what makes them fight – with legends such as Roy Shaw, Earnie Shavers and Alan Mortlock sharing their memories.

“These fantastic pictures capture what it’s like to be in the ring and the stories reveal the agonies in a fighter’s mind.” – Joe Egan, ex-sparring partner of Mike Tyson.

“Captures the world of the unlicenced game like no other book” – www.britishboxers.co.uk

Rick Senley – shortlisted for Travel Photographer of the Year 2008 – is also a journalist, writer and musician and was last seen in Brit gangster flick Killer Bitch with Alex Reid, lots of villains and some boxers.
Currently based in London, he has been following the unlicensed scene since writing an article for Front magazine.
Rick was made to box by a violent PE teacher at the age of nine, but got a nosebleed and stopped. – Rick stayed on at school, but the teacher was sacked.

Since writing this book, however, Rick has resumed his boxing training and ended up in the ring with a bare-knuckle gypsy fighter.

Rick has written about bullfighters, prostitutes and cooking beef for publications such as Loaded, FHM and Nuts as well as numerous UK broadsheet and tabloid papers.
His debut novel, Moustache Man, was book of the week in the Independent on Sunday. – After trying to master his fear of dogs by cycling to the south of Spain, he then worked there as editor of British ex-pat papers.
Rick has been shot at in Georgia, molested in a Turkish bath and bitten by an insect in Australia. He speaks French, Italian and Spanish, basic Greek, Russian, Portuguese and Hungarian.
Rick went to university in Italy, Leicester and Hungary and unsuccessfully tried to escape from a police station when working as a teacher in Greece. Despite being asthmatic, he is also learning the sitar.
Book by: Rick Senley – Blurb Publishing
200 pages – Softcover £35 – Hardcover £42
Publication Date: 16 May 2011
Order a copy from ricksenley@yahoo.co.uk or from www.blurb.com/bookstore/detail/2065096