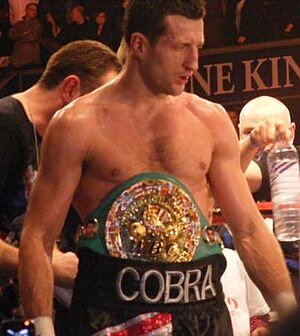 But Froch is determined to get the fight in the UK -and is willing to compensate television company Showtime with $250,000 for them to change there plans and bring there team and TV crew to cover the fight in his home City of Nottingham, England.

After having his last two fights abroad against Mikkel Kessler and Arthur Abraham, losing his world title in Denmark to Kessler, then retaining the same vacant belt against Abraham in Finland, Froch feels it is only right that his fans should now have the chance to see him fight on home soil for this one.
“Websites are reporting that the fight with Johnson will be in Atlantic City on June 4. It looks like that will be the date, but it is not 100 per cent certain yet. told The Nottingham Post.
“I’ve had my last two fights away from home and that’s not fair on my fans. They are brilliant and they deserve better.
“I’ve boxed all over the world as an amateur and a professional and I can honestly say the Nottingham fans are the most vocal and more importantly the most passionate crowd I’ve ever witnessed. Hence, the amount of work I’m putting in to bring this next fight back home.
“I haven’t got that many fights left in my career and I owe it to them to give them another big night at the Ice Arena.
“I’ve spoken to Showtime, who will obviously want compensation. After all, it’s an expensive business to bring a production crew over here.
“I’ve offered to pay them 250,000 dollars out of my share of the gate in Nottingham and I’m just waiting for them to get back to me.
“I’ll be gutted if I have to fight in America, but I can’t really do any more.”
Froch says it has been frustrating waiting for confirmation of a date and venue. As one of the best British boxers currently plying his trade, Froch also hopes that UK based TV channel Sky Sports will pick up his fight and screen it live.
“It does seem to be dragging on, but there is nothing I can do,” he said.
“I sat down and talked it over with my trainer, Rob McCracken, and we feel the fight should be in Nottingham.
“If it is, I am sure Sky will pick it up, which would be great.
“After all, my world title is at stake here and it would be great to have home advantage in front of 9,000 fans in Nottingham.
“I’m sure Glen would be ok with it. After all he is the Road Warrior.”