Lee ‘Lights out’ Purdy claimed the British welterweight title tonight knocking out Craig Watson in the 5th round, living up to his name at the MEN arena in Manchester.

After being outboxed by the impressive skills of southpaw Watson for the first four rounds, Purdy out of nowhere produced a championship winning right hand shot, landed flush on the Manchester champions chin and dropped him instantly.
Falling heavily on his back Watson rose quickly, maybe too quickly and should have taken the count, Watson’s legs had gone and although he held his gloves up to signal he was ok, but the referee waved it over after a long look into Watsons dazzed eyes.
Watson had suffered a cut early on from a good jab from Purdy, but up until a couple of good rights in the fourth, he was finding it hard to get his shots off clean, as the elusive Watson bobbed, weaved and rolled under his punches. The right hand of Purdy though had been pumping out and were shading there target but Watson’s intelligent boxing was building up the points.
But in boxing one punch can change and turn around any fight in an instant and that is what makes boxing what it is and a beaten man is never beaten until the final bell.
Watson was beginning to see things happen for him in the game after his recent successes and the capture of the Lonsdale belt, but will have to go back to the drawing board and plan his next step.
For Purdy he will never throw a better timed punch than that right hand and the new unlikely champion is the new British light-welterweight king and after a stop start pro career and no amateur experience is a massive achievement for the 23 year old from Essex.
Boxing binman Rendall Munroe made a winning return following his unsuccessful world title challenge against WBC super-bantamweight champion Toshiaki Nishioka in Japan in October, with a unanimous points decision victory over Andrei Isaeu in Manchester.

Munroe was made to work for his win by the capable Belarusian Isaeu who had come to Manchester with his own designs on winning the WBA international super-bantamweight belt that was on offer.

But Munroe stuck to his boxing and was a clear winner in the end, and going a good 12 rounds on his comeback fight will have done him no harm. 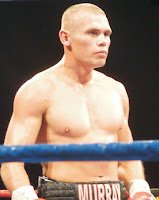 
undercard results from the MEN arena in Manchester to follow…
.