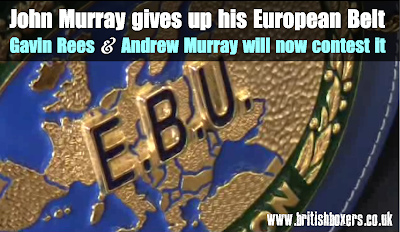 John Murray has relinquished his European lightweight title and the belt will not be on offer when he fights Kevin Mitchell in the lightweight battle of Britain this summer. Instead the fight has been billed as a WBO world title eliminator.

The fight between unbeaten Mancunian Murray and Londoner Mitchell is being billed has North vs South and a fantastic fight is set to determine the best lightweight in the country and who will get a world title shot.
Murray 26, (31-0, 18 KO’s) had been sanctioned by the EBU to defend the title against Welshman Gavin Rees 30, but because of his decision to meet Mitchell (31-1, 23 KO’s) he has been forced to vacate the belt, leaving former WBA light-welterweight champion Rees to face the number 1 contender and unbeaten Irishman Andrew Murray for the Manchester boxers old strap.
Andrew Murray 28, (24-0, 12 KO’s) will have the opportunity to equal the longest ever winning streak in Irish professional boxing, currently held by Johnny Caldwell and Rees (34-1, 1KO’s) who has been out of the ring since his win over John Watson in November last year, when he claimed the Lonsdale belt.
Rees was forced to give up the British lightweight title he won in defeating Watson, because of a nose injury he had to have an operation on, and the Gary Lockett trained boxer will want to get back to winning ways and in the world mix again. This fight is to take place in June.
A date for John Murray vs Kevin Mitchell is still to be confirmed…….