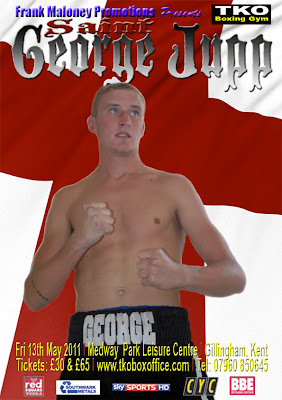 Featherweight prospect ‘Saint’ George Jupp has been added to the undercard of the Frank Maloney promoted Sam Webb versus Prince Arron British Light Middleweight title clash at the Medway Park Leisure Centre in Gillingham, Kent, on Friday 13th May 2011.
Being asked by Frank Maloney to feature on the card of such a prestigious event is sure to help 20 year old Jupp, from Belvedere in Kent, put the highly contentious loss to Raffi Khan, in Dagenham on March 18th, firmly behind him.
Right from the opening bell Khan went on the attack, Jupp kept his cool and kept the aggressive Khan at bay with some solid jabs. Whenever Khan came rushing forward Jupp would use superior footwork, to move out of range, or solid jabbing to stop him in his tracks. Khan was getting some success but usually his shots were wide of the mark.
Whilst it was fairly hard to call the first round, the second and third were clearly young Jupp’s, who had used his Jab to good effect throughout the middle rounds. It wasn’t just his jabbing though as Jupp also showed that his willingness to mix it up when needs be.
Khan began to rush his attacks, backing Jupp towards the ropes, and letting rip with wild shots. Most times Jupp would just step around, leaving Khan punching at fresh air, but on a couple occasions Jupp countered with both hands and about mid way through the round Jupp landed a peach of a right which opened up a cut above Khan’s eye.
Clearly aware he was behind on points Khan became even more forceful with his attacks in the final round, often letting rip with multi-punch flurries. Jupp would counter with solid jabs as before but instead of backing off Khan kept coming forward and kept the pressure up to the final bell.
When referee Ken Curtis’ score card was read out – 39-38 in favour of Khan – the crowd jeered, Jupp’s manager/co-trainer Johnny Eames remonstrated with the referee and the assembled press corps, of which I was one, all agreed that Jupp had won clearly won the middle rounds and probably had done enough to claim the first also.
Following a training session, at Johnny Eames’ world famous TKO Boxing Gym in Canning Town, Jupp spoke briefly on the Raffi Khan fight and his upcoming appearance on the Sky televised event, “I’m really looking forward to it, I lost my last fight so am really looking forward to it and get my loss out the way and get another win behind me.
It was a good fight, I thought I’d well done enough to win it. He was constantly pressuring me but wasn’t landing very much, mainly hitting the gloves or missing. I was catching him with one-twos all the time, so yeah I thought I had done more than enough to get the decision like.
Johnny’s put an appeal in but I doubt anything will get done about it, so I’m just going to try and forget about that and get onto better things and that. I’m looking forward to boxing on a big show on the undercard of Sam Webb, who I know well as he used to box at my amateur club and is here at the TKO regularly. It’s going to be good being on his undercard.
It’s a good show and pretty near to where I live so will have a lot of support. I can’t wait for it.”
Tickets for George Jupp at the Sam Webb versus Prince Arron British Light Middleweight Title Clash at the Medway Park Leisure Centre in Gillingham, Kent on Friday 13th May 2011 are priced £30 (Unreserved) or £65 (Ringside) and on sale NOW.
For tickets book on-line at www.tkoboxoffice.com, call: 07960 850645 or in person at The Ultrachem TKO Gym, Gillian House, Stephenson Street, Canning Town, London E16 4SA.
by Gianluca (Rio) Di Caro