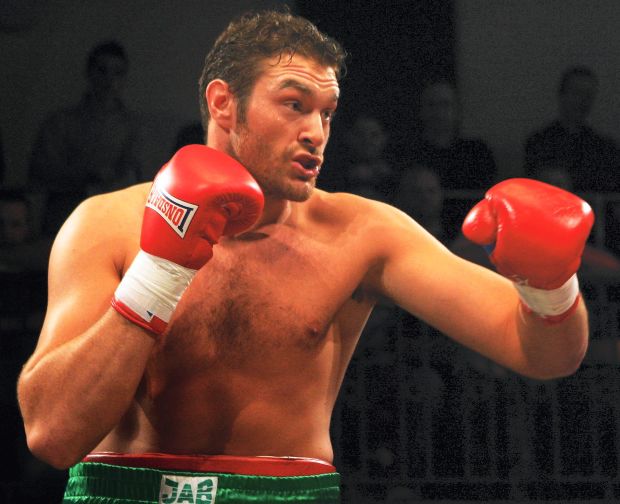 Tyson Fury will meet former heavyweight champion of the world Hasim Rahman on the undercard of the Amir Khan’s title defence against Paul McCloskey at the MEN arena in Manchester on 16 April.
With names pulling out of fights that had been set for the card and threatening to ruin what had been labelled one of the best undercards of a main event for a long time, this fight will certainly has bolstered the show, in what will be an interesting test for the 22 year old Mancunian prospect and will help to judge his credentials at this stage of his career.
Fury is waiting on the results of purse bids for his British title challenge against Dereck Chisora, which have to be in on 13th April and so without waiting around for that fight to come, to his credit he looks to keep busy in the meantime by stepping up in class to meet veteran Rahman who has been in and beaten some of the worlds best heavyweights over the last sixteen years of his career.
The American now 38, is unbeaten in his last four fights, winning all by KO – since losing to Wladimir Klitschko for the world titles in 2008 and with a record of 59-7-2, 40 KO’s is a significant step up in class for Fury.
When Rahman steps into the ring with Fury in Manchester, It will almost be ten years to the day that he shocked boxing, winning the undisputed championship of the world in dramatic fashion, knocking out Britain’s Lennox Lewis in the 5th round back in 2001 – dethroning the British champion with a huge right hand in the fifth round of their title fight in South Africa.
Later that same year, the rematch clause was set in motion and in the return fight with Lewis, his reign was cut short when he was knocked-out in round 4 by the Brit. The Baltimore fighter did go on to reclaim the WBC belt in 2005 and his most recent world title challenge ended in the 4th round when he was halted by Wladimir Klitschko in 2008.
Rahman had been touted as a possible contender for the ‘International Prizefighter’ tournament to be held in May in London, which hasn’t been ruled out as yet, but it looks like a fight on the undercard of a world title show against one of the sports rising talents, who is now under the wing of the legendary trainer Emanuel Steward, is a fight he couldn’t turn down and he will hoping all his ring no how and experience will be enough to derail the Tyson Fury bandwagon.
Fury though, the current heavyweight champion of England is predicting big things, unbeaten in 14 fights and with 10 KO’s, he believes he can become heavyweight champion of the world and has been telling anyone who would listen, Recently his confident boasts were backed up by his new coach Steward who believes that Fury will be the next dominant heavyweight of boxing.