Warren: ‘DeGale turned down a world title offer to scratch his itch’ 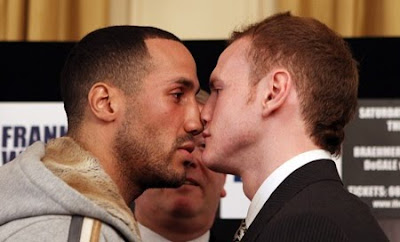 Promoter Frank Warren today said that his British Super-Middleweight champion James DeGale, had turned down the opportunity of a straight shot at the world title in order to fight his arch rival and ‘irritant Itch’ Commonwealth Champion George Groves on May 21st.
The rivalry between the two British boxers has become so intense that DeGale said he didn’t even contemplate the world title fight offer until he had settled the score with fellow Londoner and former amateur gym mate Groves.
“I am promoting the show at the O2 and this particular fight has all the makings of a classic such is the dislike between the pair. said Promoter Frank Warren today.
“However, I am also James’s manager and was pleased to receive such a good offer for him to go abroad and fight for a World title in what would be just his eleventh fight. It was also a fight I had every confidence he could have won. Of course I gave him the choice but it was a very short discussion.
“He said to me that he will win a World Title at some stage in the near future anyway but couldn’t face having a World title belt with the irritable Groves still feeding off his name, I want to get rid of Groves once and for all because he is an irritant and an itch I have to scratch. I’ve signed to fight Groves and fight Groves I will”, DeGale said.
“I don’t think in thirty years of boxing a fighter has ever turned down an opportunity to become a World Champion, in a winnable fight, in order to fight the Commonwealth champion and answer all the questions about him beforehand. For that you have to respect him as a fighter and a man.” added Warren.
Speaking from his Essex training camp DeGale said ; “I already consider myself as one of the best Super-Middles in the World and at some point the title of World Champion will be mine anyway.
“It’s god to see that Frank is doing the business at his end but I have to take care of business at my end and there is no way that George Groves will be an undefeated fighter on May 22nd and there is no way I will give him an escape route even in favour of a World Title – I’m fed up with hearing his name everywhere I go.” DeGale said.
“I can assure George that I will be in the ring on the 21st May and when I get there I fully expect to see him in the other corner. My biggest concern at the moment is with this Easter weekend expected to be unusually hot and with his fair complexion that Adam Booth is rubbing lots of factor 50 on him so he doesn’t pull out with sunburn!” – he heckled.
Tickets: for the O2 showdown are already selling at an unprecedented rate with this fight being one of many top quality contests already scheduled. Tickets can be purchased by calling the 24hour ticket hotline 0844 856 0202. www.frankwarren.tv
.