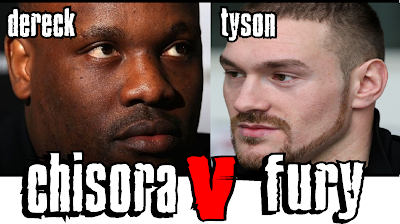 The British Boxing Board of Controls stewards, have today issued a notice asking for short term purse bids from promoters, to stage the British heavyweight title fight between Dereck Chisora and Tyson Fury, after Hennessy Promotions were unable to fulfil the terms and conditions of his original bid.

Hennessy Sports had announced that they had won the purse bids on for the fight on the 14th April, in a statement issued on their website with the promoter saying, “I’m delighted to announce that Hennessy Sports have won the rights to stage this well talked about mega fight and as per BBBofC rules we will be announcing the date and venue for this contest within the next 14 days.”
BBBofC Official Notice.
“Due to Promoter Mick Hennessy being unable to fulfil the terms and conditions of the British Boxing Board of Control Championship purse bid, the Stewards have decided to put out on short terms purse bids for Dereck Chisora v Tyson Fury, to take place by the end of July. Purse bids to be opened on Wednesday, 11th May 2011.” – said Robert Smith General Secretary of the BBBofC in his notice.
This comes as another blow for Mick Hennessy who saw his trump card Carl Froch leave him last month and only today announce that he has signed a five fight deal with Matchroom Sport, headed by Barry Hearn and his son Eddie.

Hennessy has not only seen Froch go recently but also John Murray and Darren Barker have left his stable also and things are not all they seem at the moment for them. Even though he has had fights screened on Premier Sports cable channel recently, it has been hard for the the promotion company to get a secure TV deal for their fighters and for one reason or another they have seeked pastures new.

This latest blow for Mick Hennessy will not help the job he is trying to do for British Boxing under his promotional wing, but we at BritishBoxers wish Mick all the best for the future and believe he will get over this setback and the other recent problems to continue his good work for the future of the game.