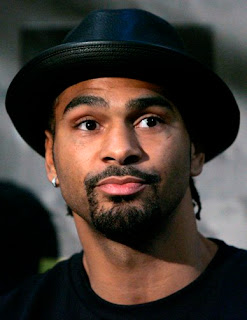 WBA heavyweight champion David Haye says he is ‘buzzing’ after George Groves’ win over London rival James DeGale and believes the victory for team Hayemaker, will be just the boost his fight camp needs, as he prepares for his heavyweight unification showdown with Wladimir Klitschko in Germany on July 2.
Haye promoter, friend and training partner of Groves, was in the ‘The Saints’ corner on Saturday night to help and guide him to a satisfying 12 round majority points decision over the Olympic gold medallist, to retain his commonwealth super middleweight belt and add DeGale’s British title to his resume.
Haye 30, believes that the positivity that runs through his championship winning camp and Groves confidence boosting victory, will create the internal atmosphere he himself will thrive on when as he prepares to face WBO and IBF belt holder Klitschko.
“Off the back of George’s win, everybody in the camp will be buzzing,” he told the London Evening Standard. “I’m big on being a positive person and if George hadn’t won for whatever reason, a cut or whatever it had been, that would have hurt the morale of Team Hayemaker.

“We run a very small, intimate gym, me and George are the two main fighters in it. Having 50 per cent of the gym coming off a career best win puts everybody on a high, it will make for a great atmosphere for my fight.”
But Haye, excited by Groves’ career best win over DeGale that takes his unbeaten record to 13 fights, 10 KOs – states that due to the cut damage sustatined by Groves from the constant clashes of heads and elbows, it isnt a fight they are looking to make anytime soon, stating that he ‘wouldn’t want to see’.
“George is growing as a man and as a boxer,” he said. “And against James he proved to me he definitely has what it takes to get to the top. He’s got all the physical attributes. And he showed against James that he has that mental edge.”
DeGale and his promoter Frank Warren have both called for an immediate rematch, but Haye says he doesn’t want the new the British super-middleweight champion to face DeGale again, stating that Groves would only be leaving himself open for more ‘head butts and elbows’. In reference to the rough stuff and cuts sustained during the fight and believes the out-come would be just the same.
“I wouldn’t want to see it,” he said. “With the amount of head butts and elbows that went in from James, all he is going to do is open George’s face up again. George would win again, probably on points, maybe a bit easier, but he’d still end up with a load of facial damage, and who wants facial damage?” Haye added.
Related articles
Groves beats DeGale on points
FULL FIGHT VIDEO: James DeGale v George Groves
James DeGale: “I want a rematch as soon as”