Haye: ‘Klitschko fight still ON but the brothers are giving me a headache’ 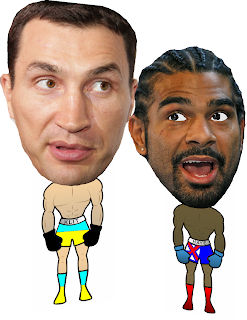 Boxing fan’s breath out! David Haye’s world heavyweight title fight with Wladimir Klitschko will still be going ahead despite a row over tickets and a little scare mongering around the web, claiming the fight was off.
The unification bout between Britain’s WBA holder Haye and Ukraine’s IBF and WBO champion Klitschko is scheduled to take place in Hamburg on 2 July and Haye has confirmed that the fight will be taking place dispute the row over ticket allocations and German fans getting first choice.
“The fight is on but the ­Klitschko brothers are giving me a headache over the tickets for my travelling fans,” Haye told the Sunday Mirror.
“I have given in to every single demand that they have made and they keep moving the goalposts.
“I’m not going to roll over and let them get their way with the tickets – I want a fair allocation and at good prices. My fans have been loyal and I don’t want a ­single one to be disappointed this time.”
The contracts for the contest at Hamburg’s 57,000-capacity Imtech Arena have been agreed, but two press conferences, the first in Hamburg on Tuesday and the second in London on Wednesday, have been cancelled leading to speculation that the fight is in jeopardy.
However, Haye’s trainer and manager Adam Booth was said to have laughed off any suggestions of a cancelled fight and said he is flying to Germany this week to resolve the issue.
So the fight the heavyweight division needs and the one the fans crave is still ON…
.