Ricky Burns vs Nicky Cook – Tale of the Tape 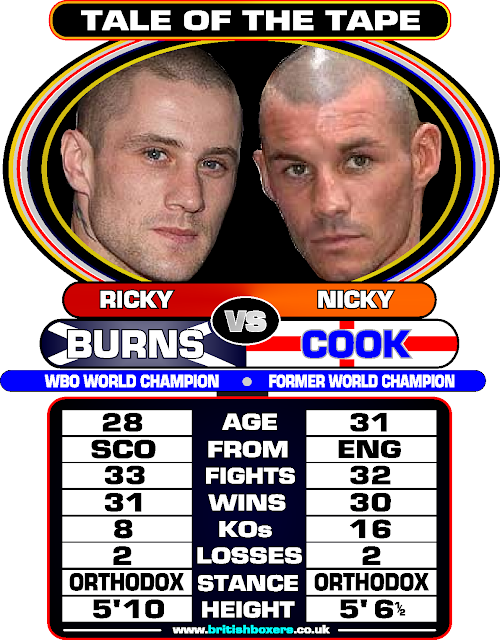 The all British title fights are coming thick and fast this year and this one will certainly be a clash to look forward to and a potential classic in the making. It has the added spice of the England v Scotland element, whilst pitching arguably the two best Super-Featherweight’s in the UK together.

Burns 28, won the WBO belt in September 2010 beating Purto Rican Roman Martinez on points. Martinez had taken the title off Cook the previous year when he stopped the Essex man in the fourth round.

Cook 31, a former British, European and Commonwealth champion at featherweight, returned to the ring after a two year layoff on Saturday night, shaking off some ring rust with a six round points win over Youssef Al Hamidi at the O2 Arena. But questions will be raised as to whether Cook should have taken another couple of fights in preparation before taking on Burns?

In the time Cook as been out, Burns has captured the title and defended it against Andreas Evensen (Norway) and Joseph Laryea (Ghana) and is a much improved boxer in all departments. But with Burns looking for an opponent for his Merseyside fight night, Cook was offered the fight and jumped at the chance to erase the pain he says he still suffers after losing his world title to Martinez.

“The only way to heal the pain is to beat Ricky Burns. I felt I had the better of Martinez but I got sloppy and I got punished.

“But I won’t make the same mistake again. Burns has done well as champion, but believe me, I’m going in their all guns blazing to win back my old belt.

“I beat a Scotsman in Alex Arthur to win the title, and I’ll beat another one to get it back.”

Burns is looking forward to the challenge from a domestic foe and knows that the former champion he admires as a fighter, will be there to take his title, but has no intention of surrendering his new found status to Cook and sees only a Scottish victory over the English and by stoppage!

“There’s always something special in the air when England and Scotland clash, and this fight will be no different,” said Burns.

“Nicky wants his title back, but even if he produces the performance of a lifetime, he won’t beat me.”

“I’ve not had a defence against a domestic opponent yet, so I am relishing this one,” said Burns.

“Nicky has always been a fighter I have admired over the years and he’s a good fighter, and he we will be really up for getting his old title back on the night.

“But I will raise my game and deliver my first stoppage win as a champion.”