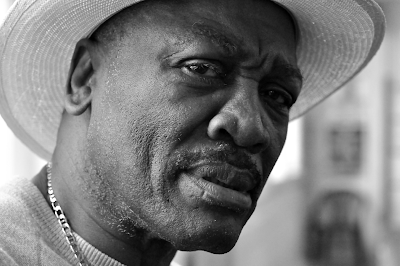 Boxing legend Smoking Joe Frazier was the brightest of stars amongst stars, when he entered the Manchester boxing gym of Joe Gallagher this week.
The boxer most famous for his epic trilogy of fights with Muhammad Ali, left Gallagher and his gym of fighting champions in awe at meeting their hero.
Frazier 67, one of the most fearsome of ring warriors to ever lace on the gloves, is not as quick on his feet as he used to be and uses a walking stick to help him get about these days.
But his sheer presence was evident, if not surreal and after tackling the many flights of stone steps that lead to Gallaghers, above Kerry Kayes’ Betta Bodies gym. The hardworking fight camp ground to an halt to salute the former heavyweight champion of the world in anticipation, as the gym door swung open and in entered Smokin’ Joe Frazier!!
Gallagher’s gym is an who’s who of British and European champion boxers including undefeated European lightweight champion John Murray, world title challenger Matthew Macklin, British champions Anthony Crolla and Stephen Smith, former British champion Paul Smith, Olympian Joe Murray and an array of up and coming boxing talent. And they were treated to a combination on the punch bag by Frazier and some boxing tales and words of advice from their fighting peer.
BritishBoxers friend and photographer, Andy Gray of www.boxingportraits.com went along to capture the moment, that trainer Joe Gallagher described as an honour and produced these great pics of the great man.

Gallagher, one of the most successful coaches plying his trade at the moment and boasts a 46 fight streak winning streak with his boxers, was delighted to meet and welcome the living legend into his gym.

“When you talk about genuine greats, Joe Frazier is up there with the very best,” said Gallagher.

“I had the good fortune to meet Ali, and now I’ve had the honour to meet the man who shared a ring with him.

“Their fights are among the greatest of all time. You could see how excited the lads in the gym were to see someone like him. He is what my fighters aspire to be.” he added.

Smokin’ Joe Frazier was born Joseph William Frazier in Beaufort, South Carolina on January 12 1944. He is considered one of the greatest heavyweights of all time.

Like other Black Americans, Joe escaped the poverty of the South and headed north first to New York and then to the industrial city of Philadelphia when he was 15. Frazier was “discovered” by local Philadelphia trainer Yancey “Yank” Durham. Durham, along with veteran trainer Willie Reddish, began to train Frazier as an amateur. Frazier won the gold medal in the heavyweight category at the 1964 Summer Olympics in Tokyo.

Despite having won Olympic Gold, Joe returned to Philadelphia and his fulltime job at a meat packing factory. A group of local Philadelphia businessmen set up the Cloverlay Group to fund Joe’s training fulltime and help him turn pro, which he did in 1965.—In 1968, New York State recognised Joe Frazier as “world champion” after his 11th round knock-out of Buster Mathis. Though not officially recognised as a world championship fight, Smokin’ Joe had staked his claim on the world heavyweight title. The New York Boxing Commission decided to hold this contest  because Muhammad Ali had been stripped of his title after having refused the draft for Vietnam on religious and political grounds.

In 1970, in a 5th round knockout, Smokin’ Joe Frazier became Heavyweight Champion of the World after defeating Jimmy Ellis. read more here at www.joefrazierfilm.com

“Joe Frazier: When the Smoke Clears” is the story of the real Joe Frazier. It is more than just a boxing film, it is the story of a son’s love and admiration for his father, it’s about community and the Black experience in 20th and 21st Century America.
The Film campaign
Joe Frazier is one of only a handful of truly global icons. Despite the fact that his fights are among the most watched sporting events in history and a part of our shared cultural history, the cost of including archive footage from Joe’s career makes it prohibitive for us, as independent film makers. Our limited production budget has allowed us to clear ‘festival rights’ but without additional finance this unique project will not be released either for broadcast or on DVD.
Please help www.joefrazierfilm.com to tell and preserve Joe’s REAL story for future generations and support our fundraising efforts. Make a donation at indiegogo.com/JoeFrazierFilm

Frazier was in UK for a special ‘audience with’ event at the Adelphi Hotel in Liverpool on Thursday night, and was also the guest of honour at a special event hosted by Wakefield Trinity Wildcats on Tuesday evening. The sportsman’s dinner, in which ‘Smokin’ Joe’ hosted an open question-and-answer session and auction of sporting memorabilia.
By British Boxers 2011 – www.britishboxers.co.uk