Chris Eubank’s son, Chris Jnr, will have his last amateur fight on Saturday night before following his father and former world champion, Chris ‘Simply the Best’ Eubank into the professional ranks.

Chris Jnr, will bow out of the unpaid ranks and hang his vest up, after taking part in a rematch against Nathan Decastro at the Metropole Arena in Brighton on Saturday night June 11.

Eubank Jnr. will sign a professional contract with his dad’s former promoter Barry Hearn of Matchroom Sport, who will hope he can get the son into the domestic title mix and eventually emulate the achievements of his famous dad.

Eubank the younger is already following some of his dads colourful ways and re-creates the famous flip over the top rope every time he enters the ring and is showing real signs of promise, under the tutorledge of coach, former British heavyweight champion Scott Welch, who promotes Saturday’s fight, for his camp Brighton and Hove Boxing Team.
With the talent Eubank Jnr. has Eddie Hearn son of Barry who now runs the boxing side of Matchroom, is confident he can make it to the top just like his dad.
“Young Chris is a chip off the old block. He has his dad’s confidence and, dare I say it, the ability to become a world champion.” said Hearn. 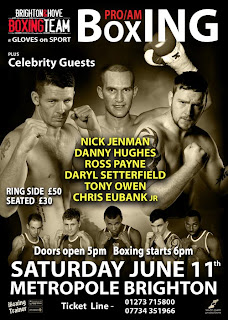 ‘If Chris Jnr. did not have the talent then we wouldn’t be in the slightest bit interested in signing him. But everyone around believes he can go to the very top like his father.
‘He will be starting off as a middleweight but will almost certainly develop into a super-middle because of his natural size.
‘My dad Barry took Chris Senior to the very top and they enjoyed a terrific 11 years together.
“I’m looking forward to the same kind of relationship with a young fighter who has the same arrogant strut as his dad. He even jumps over the ropes for his ring entrance.

“We want to get Chris as much experience as soon as possible. And he’ll be fighting often once he officially makes us his promoter.” added Hearn.

Barry Hearn talks about Chris Eubank Snr. Plus Highlights.
WATCH EUBANKS Jnr’s. Last Amateur fight on Saturday Night at The Metropole Arena in Brighton. Some tickets are still available – VIP ringside seats are £50 (sold out) and £30 seated while there is spectator viewing from the balcony priced at £10 (juniors) and £20 (adults). For tickets call 01273 715800 or 07734 351966. www.brightonandhoveabc.com
.
BritishBoxers will be at Eubanks Jnr’s last amateur fight and will showing the fight exclusively on our website www.britishboxers.co.uk next week.