Former professional boxer, trainer and promoter David Coldwell is in Mexico, to train Ryan Rhodes ahead of his quest to defeat, boxing super star world champion Saul ‘Canelo’ Alvarez on June 18 in Guadalajara, Mexico and bring back to the UK, the WBC world light-middleweight title.
Rhodes, Coldwell and their team flew out last week and have settled in to their training camp and regime very well and have been getting well looked after and made to feel welcome by the Mexican people.

Coldwell says that everyone in the City seem like boxing fans and have been asking for pictures and shouting from cars and trucks everytime they go out for a walk around Mexico’s second largest city.

Alvarez is according to Coldwell, ‘Massive in Mexico’ and the fighter is on almost every TV channel, advert and billboard and at just 20, the new world champion is seen as the man to carry the Mexican boxing torch into the next decade, succeeding the likes of, Ricardo Lopez, Salvador Sanchez, Julio Cesar Chavez, Juan Manuel Marquez, Erick Morales and Marco Antonio Barerra.

Coldwell is confident though that the new look Rhodes has what it takes to beat Alvarez in this his second coming of a career, that saw the Sheffield man become the youngest British title holder at 20 – Before unsuccessfully challenging Otis Grant in 1997 for the WBO middlweight title. Some twelve years later, Rhodes won back the Lonsdale belt and in his finest hour defeated Mancunian Jamie Moore in a world title eliminator, winning the European light-middleweight crown and the chance to face Alvarez.
In an exclusive interview with BritishBoxers, Coldwell speaks from the Mexican training camp about Rhodes’ preparation’s in the heat and altitude of Guadalajara and the fantastic welcoming they have had by the Mexican fans, who see Rhodes as the stern test needed, for their red headed hero ‘Canelo’. But Rhodes is super confident he can beat Canelo and Coldwell believes he can too and by knockout!
BB: How have you been welcomed in Mexico since your arrival last week?
DC: You know what it’s been great! Walking down the street people are stopping us. The first thing we noticed when we got off the plane, we were met by hoards of photographers, television cameras at the airport, we posed for photos, do interviews. This fight out here is absolutely massive, Canelo is Hugh! All the time we have been here people have been stopping us, shouting at us, wanting to talk, wanting photos with Ryan. It’s weird, Just yesterday this guy pulled up in a truck and started shouting ‘Ryan Rhodes, Ryan Rhodes’ can I have a picture! Its like that everywhere we go, it’s madness!
BB: How have you been treated and what are the training conditions like?
DC: We’ve been treated very well here, Ryan’s fitness conditioner Mark Willie actually found a weights gym for us to use around the corner and I’ve found a boxing gym, which is a different to the one we were told by Golden Boy we could use, I’ve found somewhere else that we want to use. It is a fantastic facility out here and we have got everything we need it’s brilliant! The food in the hotel is first class, we are eating plenty of fruit, organic food, steamed fish, chicken, we are eating very well out here and have been well looked after.
BB: How have the Mexican fans received Ryan, knowing he is there to take the title from their hero?
DC: He has been received really well, but everyone out here knows ‘Canelo’ he is Hugh, he is bigger than David Beckham back home. But there is a percentage of Mexicans who are saying to me that he (Alvarez) is famous because he is always on television programs, on adverts. But the Mexicans like their fighters to prove themselves in the ring and be in tough fights and they want to see him tested, their fed up of seeing him against guys that are too small, they are all saying this to me and they are all excited about Ryan fighting him. The Mexicans who have been in the gym, sparring and watching the training, realise Ryan can punch, so they are all looking forward to the fight. The media here has been unbelievable, they have been down at the gym everyday, the build-up is unreal. I mean I was involved in the Naz (Hamed) fights and and now the David Haye fights and other big fights and occasions like that. But here they are boxing fanatics! Like at home you have boxing fans and then there are the event fans. Here everybody is a boxing fan and this is a Hugh fight for them! 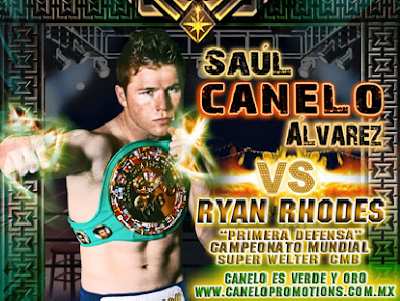