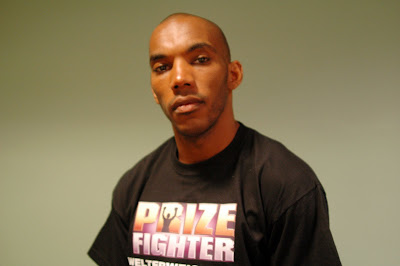 The idea is not to get beat so with that I’ll be OK, it’ll all be good.” – Junior Witter.

Rio – The Prizefighter format is a maximum of three three round fights in quick succession, six of your last seven fights were twelve round World title fights and fifteen of your last seventeen fights were title fights, a mix of commonwealth, European and World titles. How do you see yourself making the transition to three rounders?
Junior – It’s not going to be a problem, because the way I’ve trained for it. With sparring the way Dom (Dominic Ingle) pushed me. Sparring I’ve had Kell Brook, Kid Gallahad, all the other names. It works, we’ve done short, sharp, fast and they’ve hammered me.
It’s just the way I train in the gym, hammer people and they hammer you. The idea is not to get beat so with that I’ll be OK, it’ll all be good.
Rio – You’re still right up there at the top and used to competing for titles. It seems that the winner Prizefighter gets a title shot shortly after, did that influence your decision to take part?
Junior – I wanted to do it anyway. I’ve always wanted to do it since I first heard about it because I like fighting, I like boxing, I like the action and it’s three fights in one night.
I can remember back in the amateurs fighting two fights in one night. Yeah it’s hard work and it’s pressure. I enjoy that and that’s what it’s going to do for me so yeah I wanted it.
I’ll get another title fight after this one, most definitely.
Rio – OK, now onto your thoughts on the other fighters in the competition, firstly an old foe Colin Lynes.
Junior – He’s done well for himself, been up, been down. He’s a good fighter, he’s a little bit awkward but on a bad night myself he couldn’t beat me in a twelve rounder but in three rounds, well.
I’ve got no worries about him myself, I’m not worried about any of the fighters because you can’t concentrate on any particular fight because you don’t know who you are going to get. Up to now all I’ve done is concentrate on myself, which is what I like doing anyway.
Rio – Another former Champion is next, Kevin McIntyre, what’s your thoughts on him?
Junior – He was British Champion, out of all them the last fighter I see was Kevin McIntyre and that was against Kell Brook and he struggled with the power and you all know how hard I can hit, I’ve got no worries.
Rio – OK, we’ll move onto Yassine El Maachi then.
Junior – What, he’s got a big mouth. He has he’s got a big mouth, he thinks he’s the bee’s knees. I mean the difference is I know what I know, I’m not thinking, I’m not saying one day I’m going to be there, I am there, been there and I’ll be back on top again so who you name out of all of them I’m not bothered, I’m not worried about any of them.
Rio – Next up is someone you know well, Nathan Graham, what’s your thoughts on him?
Junior – That’s right. He looks in good shape, he boxed one of my friends, he beat him.
He’s awkward but he’s a completely different fighter to me so him beating him didn’t mean anything. If I get him I’ll just take it as it comes.
Rio – OK, your thoughts on Peter McDonagh?
Junior – He’s been around, he’s been out speeded before. He’s a good fighter but he hasn’t boxed anyone with my speed, my size and my accuracy.
Forget the power yeah he’d been outworked before because they were to fast for him. I’m faster.
Rio – John Wayne Hibbert’s next, your thoughts on him?
Junior – Decent enough fighter but he’s never really been tested.
Rio – Last but not least your thoughts on Bobby Gladman
Junior – I don’t know much about him other than he’s unbeaten.
Rio – Thank you so much for talking to me today, is there anything else you would like to add.
Junior – I’m not disrespecting anybody in it because everyone that’s in it it is in it because they’ve done something and it’s giving them a chance.
Everybody has a chance but I know what I’ve got, the best chance and all I’m going to do is concentrate on being the best I can and win on the night.
Prizefighter – Welterweights II, featuring Junior Witter, Yassine El Maachi, Colin Lynes, Kevin McIntyre, John Wayne Hibbert, Bobby Gladman, Nathan Graham and Peter McDonagh, takes place at York Hall, Bethnal Green in London on Tuesday 7th June 2011.
iFilm London Interview Junior Witter
iFilm London Productions in association with www.britishboxers.co.uk presents an exclusive interview with former World Champion boxer Junior Witter. iFilm London’s James Helder caught up with Junior at the Prizefighter Welterweights II official weigh-in, at The Tower Hotel, Tower Bridge, London.