Murray too much for Blackwell, Crolla wins KO1 and Joe Murray takes title

British BoxersJune 20, 2011
Anthony CrollaLATEST BOXING NEWSMartin Murray0 Comments7 min read
Hatton Promotions show at Wigan’s Robin Park Centre – Saturday 18th June 2011
Martin Murray vs Nick Blackwell
MrMegaBoxing
In the main event Commonwealth belt holder Martin Murray added the vacant British middleweight title to his collection which includes the WBA Inter-Continental strap, by stopping the previously unbeaten English champion Nick Blackwell, when Blackwell’s corner pulled their man out at the end of the 5th round after a sustained hurtful pounding from the uncompromising Murray.
Murray from St Helens is now unbeaten in 23 fights and Blackwell drops to 8-1 – The experience and gulf in class shown from early on as Murray gradually imposed himself on Blackwell the more the fight worn on and although the Trowbridge youngster was letting his combinations go, he just didn’t have the power to trouble Murray or keep him at bay. 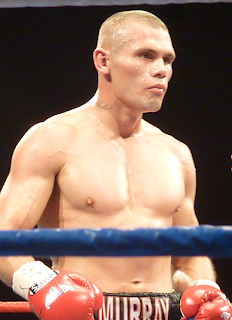 Murray’s body punches began to take there toll on the 20 year old and he was visibly hurt and wincing everytime Murray landed his crunching rib shots, sensing that his opponent was feeling the effects of his shots. Brave though Blackwell was, he even found time the goad Murray in, but the experienced Murray knew that his game opponent was there for the taking.

Blackwell took some huge right hands as the fight worn on and shown that he had the heart to stand and fight, but was eventually overwhelmed and at the end of the fourth round looked like he had nothing left to give.

Referee John Keane went over to Blackwell’s corner to check if he wanted to continue, the confident youngster even though now on an hiding to nothing and the end not looking far away, bravely got off his stool and decided to continue on. He gave everything he had left at the start of the busy fifth, but his combinations lacked any substance, whilst Murray continued to come forward and land more hurtful punches.

At the end of the fifth, Blackwell and his corner looked resigned to the fact that there wasn’t anything left and he was rightly pulled out, and saved to fight another day. Blackwell can learn from this outing and deserves credit for stepping in with the bigger, stronger and more seasoned Murray, who will now look to push onto bigger things.

The domestic middleweight scene is certainly gaining some momentum and possible big fights out there for the British champion in the future include Paul Smith, Darren Barker or Matthew Macklin.

Manchester’s British lightweight champion Anthony ‘Million Dollar’ Crolla wasn’t hanging around on Saturday night, deposing of Belgian import Herve De Luca in the first round with a sustained and controlled display of hurtful body shots, that had his Luca down three times in the opening three minutes.

It was the British lightweight champion’s third straight win inside the distance and he is now unbeaten in eight, since his points defeat to Gary Sykes in 2009. Crolla looks to be strong at lightweight and is improving no end since his Lonsdale belt win against John Watson in February and under coach Joe Gallagher’s persistence to produce champions and an unbeatable philosophy.
Crolla tight behind his guard doesn’t waste too many shots and with Luca willing to stand in front of the Crolla and trade, but he played straight into the Mancunians strength’s and excellent pin point shots. Crolla’s left hook to the body is delivered fast and hard behind the elbow and Luca a very late replacement was just not up to absorbing them. 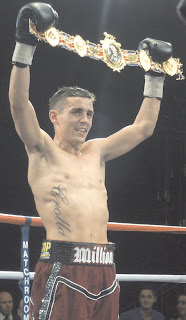 The fight, had been scheduled for the vacant WBA intercontinental title, but when original opponent Ghanaian, Osumanu Akabawas pulled out, the fight was scaled down to a 10 rounder. Crolla’s now has his sights set firmly on graduating onto the European title glory and a potential all British showdown against former WBA light-welterweight champion Gavin Rees from Wales.
Crolla though realises that against Rees he wont have things as easy as Saturday night, but at this stage and with that fight on the horizon, it was a good dominant performance as he awaits confirmation of a fight with Rees.
“It was the perfect way to win,” said Crolla afterwards. “I know Gavin Rees will be a much harder fight and he’s not going to be ruffled by that. He’s a former world champion.
“But a first round win with body shots against an opponent who came to win, I couldn’t really ask for better.
“I’m sure I will have tougher nights, but I went about it in a clinical way and did what I had to do. The first shot sickened him.
“There’s always things you can pick on and I’m my own worst critic.
“But I got the win and that is the most important thing.” Crolla’s trainer, Joe Gallagher, says a clash with Rees must now go ahead.
“If Gavin Rees has watched this, he knows Anthony Crolla is coming for him,” he said.
“They were supposed to fight for the British title on the undercard of Amir Khan’s last fight at the MEN Arena and hopefully it will happen soon.
“I’ve got a feeling with Crolla – like with Ricky Hatton and Amir Khan, he’s on a roll.
“He’s getting better and better, winning by knockouts, he’s just improving with every fight.
“People are getting really excited about him.
“Now it’s time for Gavin Rees to either put up or shut up.”

Crolla’s stablemate Joe Murray won the IBF Youth featherweight title by outpointing Scotland’s James Ancliff over 12 rounds.
It was Murray’s first distance fight over the championship course and he claimed his first professional title in the process.
Nicknamed the genius, Murray 24, brother of John Murray, is unbeaten now in 11 fights winning this contest 120-109, 120-110, and 118-111 on the judges score sheets.
other undercard results to follow