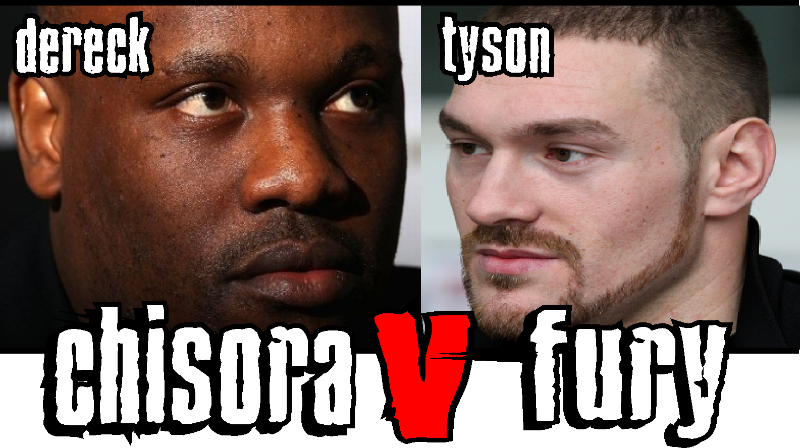 It would be a fair assessment in my view to say that the British heavyweight scene has been subject to something of a revival in recent times.

The rejuvenation of the domestic scene is furnished with such undefeated talents as David Price, Tom Dallas and Richard Towers, whilst being pushed into the forefront of sporting consciousness by British Champion Dereck “Del Boy” Chisora (14-0, 9 KO’s, 27 years old), and English title holder Tyson Fury (14-0, 10 KO’s, 22 years old), who will meet for the former’s coveted British and Commonwealth championship belts at London’s Wembley Arena on Saturday 23rd July 2011.
This fight signals another charge towards the well trodden path of “grudge match” territory that British boxing has been venturing into with a pleasing degree of regularity. Manchester’s Fury has been vociferous in his criticism of Chisora, accusing him in the past of avoidance tactics when the defending champion opted to face Heavyweight king Wladimir Klitschko instead of defending his own crown against the Wilmslow man.
The statistics suggest an even match-up. Despite a six year age gap, the champion possesses no advantage in professional prize-fighting experience. Both men have successfully negotiated their way through fourteen contests, with Fury stopping ten of his opponents early and Chisora halting nine of his victims before the final bell.
The challenger will enter the ring as the noticeably bigger man, an advantage that will no doubt be utilised in order to negate Chisora’s strategy (as stated in the press conference) of being “all over (Fury) like a babies’ rash”. Quite what this term entails is somewhat ambiguous at first glance. However, from previous showings, it is obvious that Chisora is a man who will push forward in the manner of a Sherman tank in order to get his desired result, as Sam Sexton found to his dismay when he was stopped in the ninth round last September.
There may still be questions to be answered regarding the English champion’s ability to truly neutralise an onslaught. The controversial events surrounding his first encounter with “Big” John McDermott served as the example for such a query, with many feeling that Tyson lost their initial outing due to the Essex man’s pressure tactics.
Fury also has a propensity to keep the left hand low at times, a trait that may need to be rectified in order to obtain a win in this fight. In the second meeting with McDermott there appeared to be a number of occasions where the right hand grazed Fury’s left side. Where McDermott wilted in the heat of the night, Chisora’s stamina and hard punching could expose Fury’s slight weakness.
On the other hand, Fury has exhibited a talent in the use of a ramrod jab. Such a weapon in his arsenal could be a key attribute when trying to discourage a come forward fighter like Chisora. That same jab was used to systematically dissect Brazilian Marcelo Nascimento, before fury pole axed the outgunned pugilist with a hard right hook to end proceedings in the fifth.
It is obvious that there is a distinct gulf in class between a decked South American and an undefeated British and Commonwealth Heavyweight champion, but the next subject of Tyson’s Fury should definitely take note if he wishes to ensure that preparations can be exercised to their full potential, leading to a triumphant double championship defence on the evening of the 23rd July 2011.