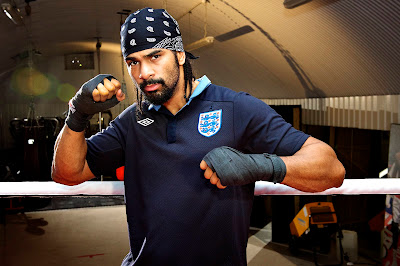 English WBA Boxing Champion, David Haye, will tomorrow night launch the new England Away football shirt when he walks into the arena ahead of his world heavyweight title unification fight against Wladimir Klitschko.
Haye will be the first person to wear the smart navy blue England Away shirt as he makes his entrance to the Imtech Arena in Hamburg.
Haye is no stranger to representing England Away, having fought across Europe and the US during his boxing career. For decades English sporting heroes have stepped out into arenas worldwide, some to welcoming fans, others to more hostile receptions but always proud to represent their home nation.
Haye commented: “It’s an honour to represent my country away from home and as a football fan, the opportunity to launch the England Away shirt is a huge privilege.
“I’ve had several messages of support from the England camp, including Fabio Capello, John Terry and Rio Ferdinand, so I’m determined to put in a strong performance and bring the world title belts back to England.
“Like many English sportsmen and women, I’ve faced opposing fans when I’ve fought abroad before and tomorrow night being in Germany will be nothing new for me. And I know that the support back home is immense.” 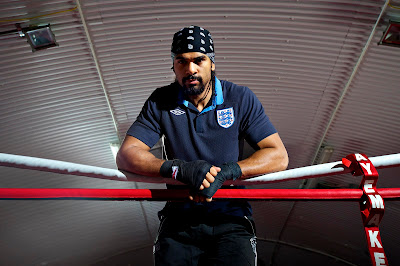 Haye’s entourage will also be sporting blue by wearing light blue Umbro anthem jackets as they walk to the ring.
After the last England Away kit was revealed on rockers Kasabian in Paris, kit supplier Umbro was keen to once again support an Englishman abroad representing his country on foreign soil.
Trevor Cairns, Chief Marketing Officer for Umbro, commented: “David is the embodiment of courage and pride so he is the perfect representative for England abroad.
“Representing your country, at home or away, is one of the greatest honours for a sportsman. The football rivalry between England and Germany goes back years so David’s fight in Hamburg presented an ideal opportunity to launch the new England Away shirt. There’ll be many fans in Hamburg rooting for Klitschko however Haye will by flying the flag for England.”
The new England Away shirt is blue; blue is part of England’s DNA and has been used by the England team since 1930. Inspiration for the new shirt was also taken from the blue caps given to England players, as well as the original British passports, which were navy in colour.
England’s kits are made by football tailoring brand, Umbro. For more than 87 years, the Manchester-based sportswear company has produced tailored football kits, which blend style and performance. The new England Away kit is constructed using modern tailoring techniques:
• Lightweight and breathable, the shirt uses mesh technology to increase the air flow to the body, updating a design first introduced to the England shirt in 1970 for the Mexico World Cup.
• Built using full polyester on the inside to draw sweat away from the body. The cotton outer gives a smart appearance which drives confidence in the player.
• Featuring a raglan sleeve and darting over the top edge of the shoulder, the shirt maintains its shape whilst allowing freedom across the body
The new England Away kit embodies the team’s values of pride and courage. It is available for pre-order now and will go on sale August 10th 2011.
It will be worn by every level of the England team from juniors to seniors including the women’s team.
Visit www.umbro.com/england