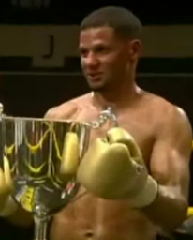 Robert Lloyd Taylor is hoping his unexpected Prizefighter light-middleweight win at the York Hall in Bethnal Green last week, can earn him a shot at the British welterweight title.

Taylor was a substitute opponent on the night, but was given the call to prepare himself for action, when JJ Bird pulled out after becoming unwell in the dressing room. Taylor had to flip a coin with the other stand by opponent, he won and that was only the start of his good fortune, defying all the odds to prevail and claim the Trophy plus a £32,000 winners cheque.

Taylor 31, from West London, an heating engineer by trade, had to beat Takaloo, Peter Vaughan and then Nick Quigley in the final to complete his triumphant night, but was back to his day job the next morning fitting boilers and dreaming of a shot at the Lonsdale belt.

He plans to move back down to welterweight and target bigger prizes at his natural weight. Taylor has had a stop and start career, with 7 defeats on his record (18-7, 5KOs) and was deamed journeyman status going into the competition. But this is what dreams are made of, after losing 3 fights on the bounce in 2007, Taylor didnt box for two years.

He had a one fight in 2009 against Lee Noble a 4th round points win and then we didnt see him again for another two years, until June this year when he returned to outpoint Tommy Broadbent. His availablilty was noted by promoters Matchroom Sport and he was drafted in Prizefighter as back-up and the rest is history.

Lee Purdy 24, from Essex, is the current British welterweight title holder and will be looking to make a voluntary defence of the belt he won in April by beating Craig Watson. Purdy made the first defence of the title a mandatory against Watson, by stopping the Mancunian in round 5, as in the previous fight, to retain the belt in July and Taylors name could just fit the criteria for team Purdy’s shortlist.